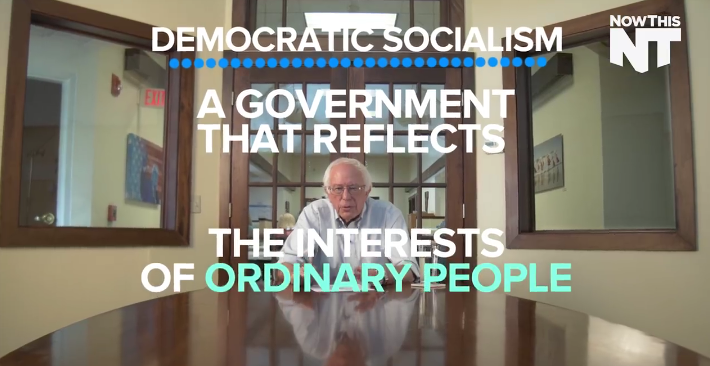 Presidential candidate and self-described socialist Sen. Bernie Sanders (I-VT) has doubled down on why he supports “democratic socialism.”

“What democratic socialism is about is having a government which reflects the interests of ordinary people, rather than is currently the case, the billionaire class, “ Sanders told NowThis. “If you look at countries throughout Europe, especially in Scandinavia, you find that health care is a right of all of their people, and in fact, they do it in a lot more cost effective way. There is no great debate about the cost of college education in those countries, because by in large, college education is free. You have in all of those countries, workers having significant benefits in terms of pay, vacation time, and medical leave. You have very strong childcare systems in all of those countries.”

“And by the way, in most of those countries, the voter turnout is a lot higher than it is in the United States. And they are pretty vigorous democracies. So, what democratic socialism means to me, is creating a government and policies that work for ordinary people, rather than where our political system is dominated by large campaign donors who are working for the very wealthy,” Sanders explained.

In a recent Vox interview, Sanders described “democratic socialism” as taking “a hard look at countries around the world who have successful records in fighting and implementing programs for the middle class and working families.”

Bernie Sanders Explains Why You Shouldn't Be Scared Of The Ter...