Belafonte on Trump Presidency: 'Welcome to the Fourth Reich' 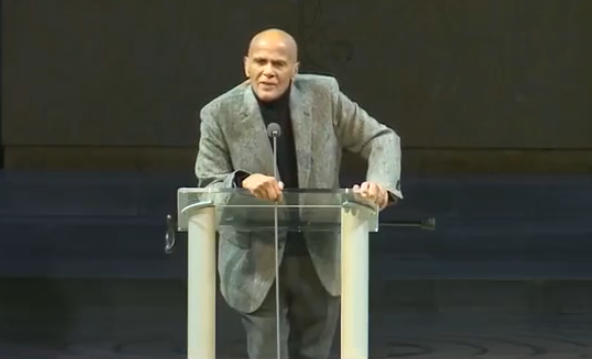 Harry Belafonte has a serious disease. Actually he has two terminal diseases. One is foot-in-mouth disease, and the other is liberalism.

Belafonte and 2,000 others flocked to Riverside Church in New York City to celebrate Democracy Now’s 20th anniversary. You can equate the sheeple celebrating such an occasion to Charles Manson’s flock coming back to celebrate his “accomplishments.”

During his oh-so impassioned speech Belafonte, who is known for his radical statements, commented on Donald Trump’s election to the White House:

In a few weeks from now, if there is a platform on which I will be privileged to stand and speak, my opening remarks will probably be something like "Welcome to the Fourth Reich." I was talking with a comrade recently. He was a victim of the Third Reich. He was a victim of the great Holocaust and what happened to the Jewish people during the reign of Hitler.

Whether you voted for Trump or not, how dare Belafonte compare a presidency that has not even begun yet to possibly the Holocaust, arguably the worst tragedy in human history?

I grew up in Skokie, Ill. For those of you to which Skokie does not ring a bell, Skokie at one time had one of the highest percentages of Holocaust survivors per-capita living in it post-WWII. The Illinois Holocaust Museum resides in Skokie as well. While I am not Jewish, I recognize the atrocities those people had to go through, and for someone like Harry Belafonte to use the Holocaust as a comparison to a not-yet-begun presidency is egregious and vile.

I am not saying that Belafonte is necessarily a Communist, but me calling him a Communist is more evidenced than Belafonte basically calling Trump and his supporters Nazis.

Belafonte does use the term “comrades” twice in his speech rather than call his friends, “friends.”

And all my life I have committed myself to making sure that here, this country, not for the want of effort, but I and so many others would be forever committed to the idea that America will remain an open and a free and a democratic society. With each cycle, those thoughts become a bit dimmed. Now, I think, more than ever, we are in need of Democracy Now!

This country was founded to be a Constitutional Republic, not a Democracy. Democracy leads to Socialism, and as infamous Soviet Communist murderer Vladimir Lenin once said, “The goal of Socialism is Communism.”

Stalin said this in 1905, “Whoever wants to reach socialism by any other path than that of political democracy will inevitably arrive at conclusions that are absurd and reactionary both in the economic and the political sense.”

Before he labels an entire segment of the population as a hateful, historical and heretical group, Belafonte might want to remember why he hasn’t been truly relevant in 30 years.

What these “celebrities” don’t understand is that when they say things as crazy as what Belafonte purged from his word hole, they alienate half their audience. And they wonder why their movies or albums don’t do as well on the charts.

I was taught to respect my elders, but Belafonte should be ashamed of himself.

For video of Belafonte's comments, watch below: