Bahaha! Actor Rob Schneider Says California Democrats Would Vote For 'A Bowl of S**t If It Had D Next to It'

There’s no other way to say this. If you’re happy that it’s Friday and you could use a chuckle, actor Rob Schneider has come to your rescue.

The star of the Netflix show “Real Rob” retweeted a Telegraph article shared by human rights activist Ayaan Hirsi Ali about how the left ignores the despair, and even the dictators, from communist regimes like the one headed by late Soviet monster Joseph Stalin.

Obviously, that’s not where the hilarity comes from. Schneider decided to add a little flavor to his retweet by making a comparison to those in the state he lives in, California.

I’m not going to ruin it. Take a look: 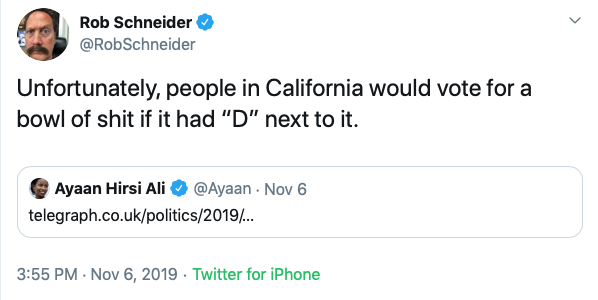 And because it’s Friday and I want to keep the good times rolling, instead of showing all of you the outraged responses to Schneider’s tweet, let’s go with the responses from people who still understand what actual humor is.

Hopefully you all got a couple of laughs. You’re welcome.