Gosh, Slate’s “Tech” writer, April Glaser, sure seems to have her heart in the right place.

Like an adorable, uneducated child, she’s written about the importance of protecting the planet by deplatforming Facebook users whom she calls “hateful." On her somnambulistic, NPR-like podcast, she’s exposed her ignorance of regulatory hurdles when “explaining” why the internet “naturally” didn’t become the “free” Utopia she claims libertarians thought it would become.

As Tim Pool has reported, she’s relied on the wholly unreliable leftist Southern Poverty Law Center to paint people like Gavin McGinnis as “hateful” and on June 7 Tweeted her support for government regulations to suppress what she terms “hateful” speech, even though she claimed it wasn’t about “regulating content". 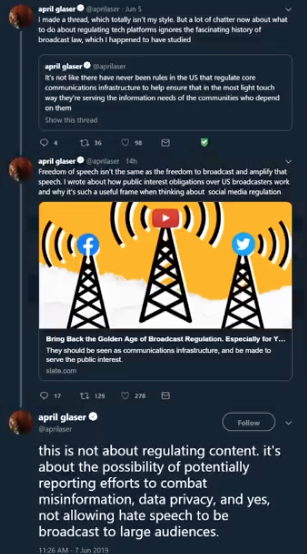 In fact, in a shiny new Slate piece, she proclaims the feds should, “Bring Back the Golden Age of Broadcast Regulation (Especially for Youtube and Facebook)”. So perhaps she’s more in favor of speech regulation than she admits.

A "Golden Age", eh? First, let’s inform Ms. Glaser: there is not only no power granted to Congress to “regulate” (i.e. fasciastically control) “broadcasts” in the radio/television spectrum, the First Amendment specifically prohibits any such statutes.

But what if Glaser claims that radio waves and the web travel over state borders and are, therefore, open for fed regulation under the much-misread "Interstate Commerce" clause of the Constitution ?

As Edmund Contoski notes, James Madison specifically warned people that reading the Constitution in such a way was unjustified, that the “Interstate Commerce” clause was written to provide a remedial forum for state-on-state trade conflicts.

Okay. But what if politicians claim that the radio spectrum is a “limited resource” and must be controlled by the government?

That's not a logical foundation to support government control. For example, despite the fact that they are renewable, there are only a limited number of usable trees on the planet at any given time. Hypothetically, we could use them all before we could renew them. Would Ms. Glaser applaud politicians telling people they’re going to control the content of books and newspapers because they utilize a “limited resource”?

Simply put, not only is the FCC unjustified, there never was a “Golden Age” for the “regulation” of broadcasts. It’s really an age of favoritism and political power-plays, and here's how it started...

In its infancy during the first two decades of the 20th Century, radio was used for the wireless transmission of telegraph data, not entertainment. While it was a medium for communication, it was not yet a medium for mass communication in the popular sense.

Radio broadcasts for news and entertainment began eight years after the Radio Act, and they caused a virtual firestorm of interest. By 1922, there were 576 stations broadcasting nation-wide, and some of those were growing into very successful companies. Suddenly, the political interest in the new medium became strong -- especially from those businessmen who were intent on restricting competition in their areas of operation -- and soon, then-Commerce Secretary Herbert Hoover exploited their mercantilist desires. That very year, he called for a series of annual “public-private” conferences, conferences, writes B.K. Marcus, of the Ludwig von Mises Institute, that were:

…attended by major broadcasters and orchestrated by the Department of Commerce. At the first such conference, L.R. Krumm of Westinghouse complained that it was ‘perfectly possible to establish a so-called broadcasting station for about $500 or $1000 initial investment.’ The programming from these upstarts consisted of ‘nothing but phonograph records, and that sort of station can interfere very disastrously with such a station (news) as we are trying to operate.’ …(J)ust in case his meaning wasn't clear, Krumm added, ‘I believe 12 good stations, certainly a maximum of 15, would supply most of the needs of the country.’

In 1923, Hoover’s restrictions on stations led to a confrontation in the US Supreme Court, which issued a mixed ruling in the first landmark radio-oriented case, called Hoover v. Inter-city Radio. The Justices denied Hoover the power to withhold licenses, but granted him the ability to choose times and frequencies for the license applicants, to minimize “interference”. So, technically, it wasn’t a restriction on him, at all.

Hoover continued to withhold licenses that might introduce competition. Between 1923 and 1925, he held more of his cozy “broadcast conferences”, where he could mingle with and be glad-handed by the vested interests who frowned on competition, and he began to spout off about the spectrum being used in the “public interest” – as he defined it.

Then, in 1925, Hoover chose to simply stop issuing licenses at all, arguing that “the spectrum was completely filled.”

Again, he was met with a Supreme Court Challenge. Upstart Zenith Radio Corporation fought Hoover and the much larger General Electric, which had been given a plum option to override Zenith’s broadcast schedule. Zenith had chosen to ignore the unethical and immoral restrictions, and Hoover and his cronies brought criminal charges against the company. Zenith was not to be deterred, and in the 1926 case of United States v. Zenith Radio Corporation, Zenith emerged victorious.

Not only was Hoover denied the power to restrict licensure, he was forbidden from regulating time and wavelength position.

Marcus notes that an angry Hoover then tried another legal tactic:

Because the Inter-city and Zenith decisions conflicted, Hoover turned to the acting Attorney General of the United States for an interpretation of the law. The Attorney General declared (precisely what Hoover didn’t want to hear) that the federal government had no authority to define any rights to the spectrum.

Ouch. Big-government Hoover must have felt as if he had broken a mirror or crossed the path of a black cat, so the desperate Commerce Secretary tried one last ploy. He engaged in economic sabotage by creating a classic “tragedy of the commons”.

Hoover swiftly adjusted tactics. Reversing his earlier decision to stop issuing licenses for new stations, he suddenly flooded the market with free and over-lapping licenses that had no defendable property rights attached to them. This would inspire overuse and conflict, causing such turmoil within the radio market that there would be a clamor for a non-participant to act as referee. With lobbying help from the biggest radio interests like GE, planned on that arbiter being the federal government.

In late 1926, much to Hoover’s chagrin, small station owners got a strong legal boost, when an Illinois court ruled on the case of Tribune Co. v. Oak Leaves Broadcasting Station, a case in which a station owned by the Chicago Tribune brought suit against a broadcaster located within a 100 mile radius of its own towers. It was the contention of the Tribune’s WGN that any station in such proximity had to maintain a fifty-kilocycle differential between their broadcast frequencies. WGN’s managers felt justified in bringing an action for trespass onto their legally acquired wavelength property.

According to Marcus, the case didn’t need Hoover or the federal government’s regulations to be resolved. In fact, all it needed was honest dealers. The judge completely discarded the federal law and reached a decision based on property rights and common law:

Chancellor Francis S. Wilson decided the case wholly within the legal tradition of property rights in common resources. His landmark decision, which established homesteading rights in ‘the ether,’ found precedent in western water rights, among other established property traditions. Wilson concluded the court was ‘compelled to recognize rights which have been acquired by reason of the outlay and expenditure of money and the investment of time… We are of the further opinion that, under the circumstances in this case, priority of time creates a superiority in right…’

This was not a welcome development for Hoover, nor for his Congressional allies and his corporate friends. His sabotage of the market was being remedied by lower courts and by the market itself, so in December of 1926, Congress issued a bi-cameral resolution that no private rights to the radio spectrum would be recognized by the federal government. Broadcasters were told to sign waivers, dismissing such rights, and denying any vested interests in the licenses they held.

The federal rationale was, of course, that Congress had to “control interstate commerce”.

And since that time, the "Golden Age" of broadcast regulation has:

Delayed  broadcast television for five years in the 1940s, because it would have “competed” against vested radio interests. Granted oligopoly license status to the major television networks (ABC, CBS, and NBC grew out of the federally created “Red and Blue” networks). Claimed the power to fine people for saying “bad words” or showing “bad images”, and used the power of the FCC to shut down radio stations that broadcast opinions critical of certain politicians.

This is the corrupt-to-the-core paradigm Ms. Glaser and others would like to see applied to speech they label “hateful” on the internet.

And their final argument might be that the “internet” is a creation of “government”, which has been proven false by publications as diverse as The Wall Street Journal, LewRockwellDotCom, and Anarchobuddy. It overlooks the fact that, as Steve Fritzinger writes, a man named JCR Lidlicker came up with the web-linked computer idea in 1962, prior to working for ARPA, the federal “defense” contractor often cited as the source for the “creation” of the web.

None of these facts appear to matter to Ms. Glaser, the “reporter” who thirsts for the feds to get their claws into regulation of content online and restore a Utopia that never existed.

Little seems to matter to her except silencing ideas she does not like.

Let’s hope we never see her form of Utopia.