In response to the terrorist attack in Paris that killed at least 129 people and injured more than 300 others, Australia’s Grand Mufti issued a statement claiming terrorism is caused by racism, Islamophobia, and military interventionism.

In the statement released on Facebook, the Australian National Imams Council head, Dr. Ibrahim Abu Mohammed, wrote, “We would like to convey our deepest condolences to the families and friends of the deceased. We reiterate that the sanctity of human life is guaranteed in Islam.”

Mohammed then stated “causative factors” of terrorism must be addressed:

“These recent incidents highlight the fact that current strategies to deal with the threat of terrorism are not working. It is therefore imperative that all causative factors such as racism, Islamophobia, curtailing freedoms through securitisation, duplicitous foreign policies and military intervention must be comprehensively addressed.”

“In addition, any discourse which attempts to apportion blame by association or sensationalises violence to stigmatise a certain segment of society only serves to undermine community harmony and safety.”

The Grand Mufti ended with a call for people to “stand against fear-mongering and injustice.”

“Credit goes to those who have called for calm and responsibility," he said, addin, "We call upon all people of goodwill to stand against fear-mongering and injustice.” 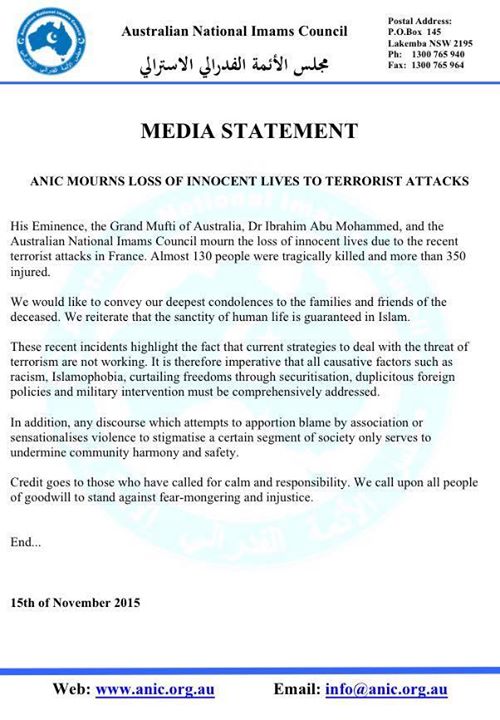 As the Grand Mufti of Austrialia and the head of the Australian National Imams Council, Mohammad is in charge of “the only central, Islamic body that holds key representation from Australian-based Muslim clerics.”

The portion from the Grand Mufti’s statement offering his “deepest condolences” to the families and the friends of the victims are almost verbatim from a previous statement he issued regarding the Parramatta shooting in Sydney on Oct. 2.