The award for Liberal Idiot of the Week goes to a gym owner in the Atlanta area. Let’s take a look at what this toolbag did, shall we?

Jim Chambers, the owner of the EAV Barbell Club, posted a message in the window of his establishment for passersby to see, which explicitly stated, “No f***ing cops.” 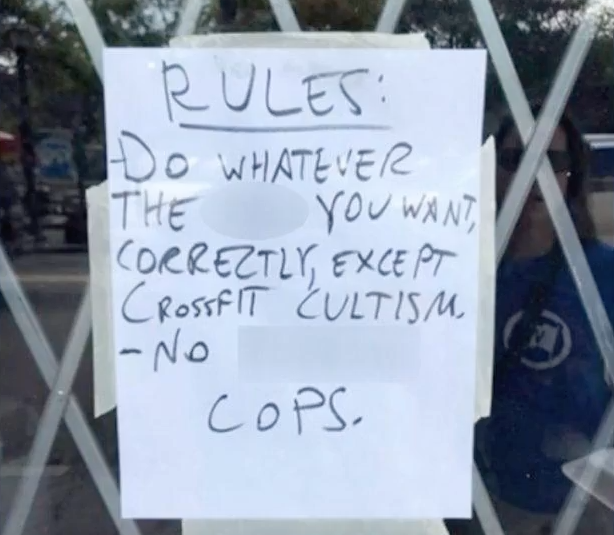 While Chambers apologized for the vulgarity in the message on the sign, he doubled down on his strict “no cop” policy before expanding his hatred even further.

“We’ve had an explicitly stated ‘no cop’ policy since we opened,” Chambers said, “and we also don’t open membership to active members of the military.”

Chambers’ head might literally be full of meat, because he certainly doesn’t have a brain in there.

According to NBC 11 - Atlanta:

For Chambers, a lifelong political activist, the sign and policy is a political statement outside a multi-use space which serves as a gym, community gathering spot and meeting place for activists in the metro area.

He says groups who work out there are generally minorities who are uncomfortable with the presence of law enforcement agents.

Leave it to a self-guilting white liberal like Chambers to defend minorities by, of all things, discriminating.

Atlanta police (APD) took the high road in this situation, which police typically do when dealing with fake tough guys like Chambers, and told NBC 11 that they would still serve and protect anyone at the gym should an issue arise.

“Were we to respond to an emergency there,” APD told NBC 11, “this sign would not stop us from lawfully doing our job.”

Mr. Chambers, you might have no respect for law enforcement or military, but rest assured that those same people you hate will still save your life if needed. Which makes them leagues better than you.