Assange Claims Clinton and ISIS Are Funded By the Same Sources 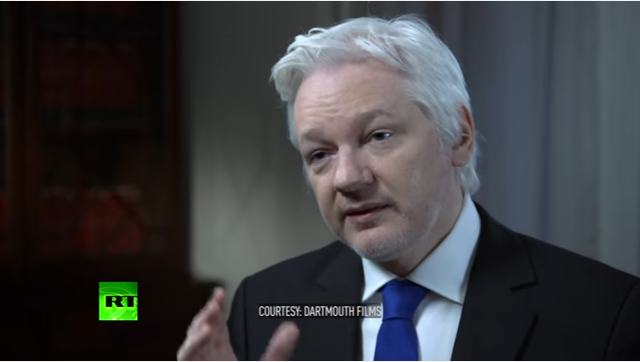 In the discussion, Assange states, “There’s an early 2014 email from Hillary Clinton, so not so long after she left secretary of state, to her campaign manager, John Podesta. That email, it states that ISIL, ISIS, is funded by Saudi Arabia and Qatar—the governments of Saudi Arabia and Qatar.”

In the email Assange referenced, which has been released by WikiLeaks, Clinton wrote to John Podesta detailing certain aspects of U.S. foreign policy, including this line:

"While this military/para-military operation is moving forward, we need to use our diplomatic and more traditional intelligence assets to bring pressure on the governments of Qatar and Saudi Arabia, which are providing clandestine financial and logistic support to ISIL and other radical Sunni groups in the region."

“Saudi and Qatari money is spread all over the place, including into many media institutions," Assange said. "All serious analysts know, even the U.S. government has mentioned, or even agreed with, that some Saudi figures have been supporting ISIS, funding ISIS. But the dodge has always been that it's just some rogue princes using their cut of the oil money to do whatever they like but actually the government disapproves."

But Assange emphasizes the importance of Clinton's claim that the Saudi and Qatari governments are funding ISIS -- the same governments that have donated millions to the Clinton Foundation. The New York Times recently reported the Saudi government had donated between $10 million and $25 million to the charitable group. Millions were also given by the Qatari government, which even offered Bill Clinton a $1 million gift for his birthday back in 2012.

Assange added that while the Saudis were busy giving money to the Clinton Foundation -- and apparently to ISIS -- they were also benefiting from boosted arms deals with the U.S. while Clinton served as secretary of state.

“Under Hillary Clinton, and Clinton emails reveal significant discussion about it, the largest ever arms deal in the world was made with Saudi Arabia—more than 80 billion dollars," Assange claimed. "In fact, during her tenure as secretary of state, total arms exports from the U.S., in terms of the dollar value, doubled.”

Pilger responds by saying, “And of course, the consequence of that, is that this notorious terrorist group called ISIL or ISIS, is created largely with money from the very people who are giving money to the Clinton Foundation?”

The full interview, to be exclusively broadcast by RT, will air Saturday. In the meantime, here's a preview: