AOC Accuses Sen. John Cornyn of Praising Mussolini In What Might Be Her Dumbest Take Yet

Now, I'm not saying that York Rep. Alexandria Ocasio-Cortez is dumber than a box of rocks.

I'm just suggesting that she's proof of why society's having to launch ads telling people not to eat Tide Pods and snort condoms.

In what might actually be her dumbest take yet, which is truly saying something, the freshman congresswoman accused Republican Sen. John Cornyn of praising Italian dictator Benito Mussolini in a tweet…

…which the Republican lawmaker had posted as a criticism of Mussolini and socialism.

But the point must’ve gone entirely over AOC’s head, because apparently, she thought Cornyn was actually venerating a fascist tyrant.

“In case you missed it, while the GOP is calling paying a living wage “socialism,” a Republican Senator full-on quoted National Fascist Party leader and Hitler ally Benito Mussolini like it’s a Hallmark card,” AOC tweeted, and not at all sarcastically. 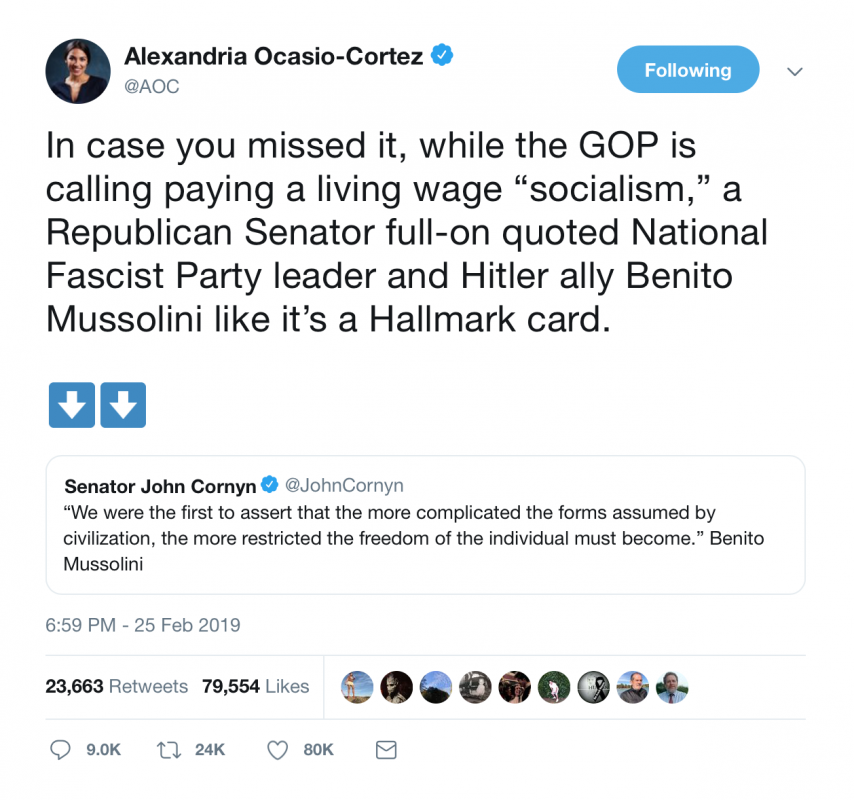 Cornyn, on the other hand, was obviously (and correctly) quoting the dead ruler as an example of just how tyrannical big-government socialists like AOC are when it comes to implementing their own agendas – agendas that naturally require stripping individuals of their own personal liberties for the "greater good."

Now, maybe Ocasio-Cortez ate paint chips as a child. Maybe she was dropped on her head as a toddler or huffed too much glue in middle school. I don’t know. But there has to be some viable explanation for this level of intellectual density.

Then again, more than 80,000 Twitter users “liked” her tweet, implying that such a dearth of mental competence might be less of an anomaly and more of an epidemic – which, frankly, is about as depressing as it gets.