Anti-Gun Activist David Hogg Vows He Won't Have Kids: 'I'd Much Rather Own a Porsche'

Anti-gun activist and professional town crier David Hogg declared on Twitter over the weekend that he doesn’t plan on ever having children, saying he’d “rather own a Porsche and have a Portuguese water dog.”

Which is great news for everyone who doesn’t want another generation of anti-rights soy boys with perma-scowls and a celebrity complex.

“I’m never planning on having kids,” Hogg posted. “I would much rather own a Porsche and have a Portuguese water dog and golden doodle. Long term it’s cheaper, better for the environment and will never tell you that it hates you or ask you to pay for college.”

“Like yes kids are nice but most people can’t afford them so it’s nice to have friends with one but not have one yourself,” he went on. “Pets are the affordable version of kids today for Millennials and Gen Z and plants are now the more affordable plants.”

“Like the number of people I know who literally throw big actual birthday parties for their dogs that they have friends invited and everything is awesome but also very telling of our changing view of having children and our economic condition,” Hogg said. 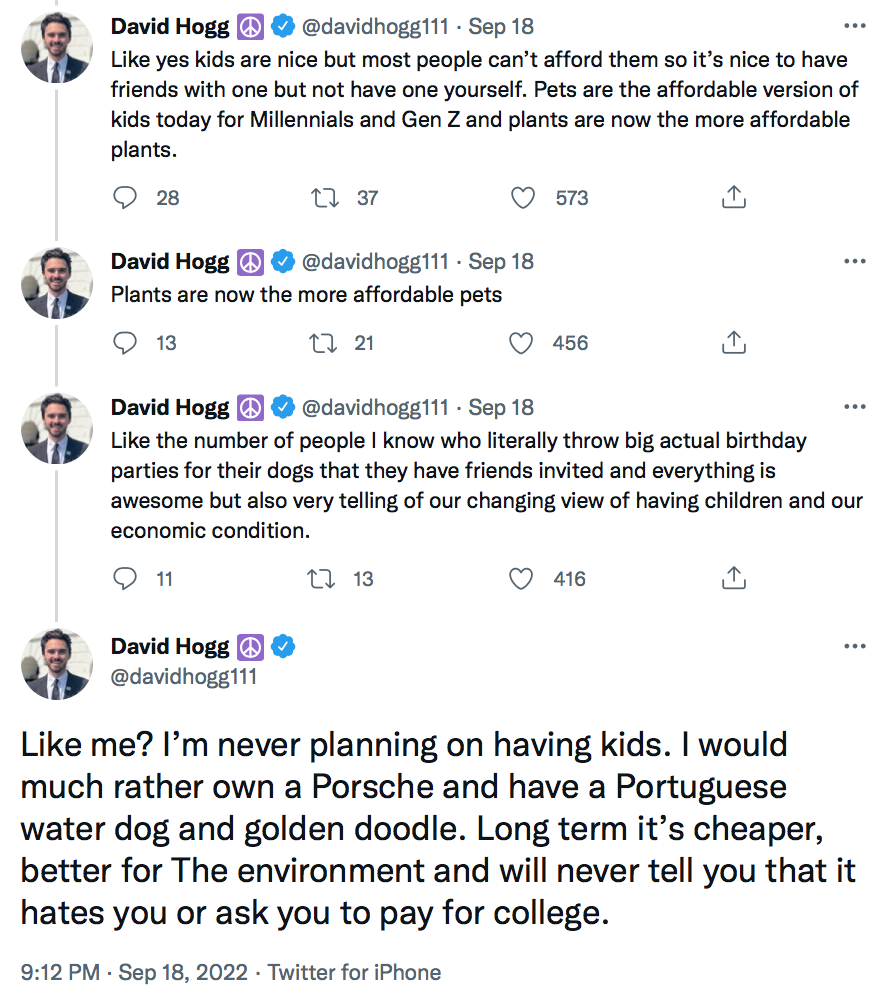 And, like a broken clock, he’s not wrong – at least, not about this.

Now, to be clear, Hogg is dead wrong about the value of children, the benefit of having them, and the supposed impact of procreation on Planet Earth. On that, he’s about as correct as when he tries to describe different types of firearms - meaning, not at all.

But he’s not wrong in saying that younger generations are throwing the baby out with the Fiji water and choosing personal luxuries over having kids. As of 2020 the U.S. birth rate clocked in at just 55.8 births per 1,000 women between the ages of 15 and 44, down almost 20 percent from the 69.3 babies born per 1,000 women in 2007. In 2017, I wrote a piece describing how Millennials were acquiring houseplants in place of having families. More and more young people are citing “climate change” as a reason for not wanting kids.

According to a recent survey of more than 1,000 Gen Z’ers, 27% said they don’t want to have kids, with 89% saying they like the flexibility of a childless life and 70% saying they prefer having “alone time.”

Which, as a college graduate and professional writer as well as the mother of two beautiful children who fill my life with irreplaceable joy, is perhaps the saddest and most short-sighted view I can imagine having, and one I believe most young people will come to regret as their 30’s fade in the rearview mirror.

Although when it comes to David Hogg choosing not to reproduce, I really can’t complain.