While the liberal media continues to paint the Trump administration’s stance on the migrant caravan headed to the U.S. as “cruel” and “inhumane,” a majority of Americans want the U.S. government to stop the migrants from entering illegally, a new Rasmussen poll shows.

The poll finds that 51 percent of Americans want the Trump administration to stop the migrants at the U.S.-Mexico border, meanwhile 38 percent "disagree and say the government should allow them to enter temporarily until each of their cases can be individually reviewed,” Rasmussen reports.

The migrant caravan originated in Honduras and is now making its way through Mexico toward the U.S.

The caravan has grown to over 7,000 people and the number of migrants only seems to be climbing.

As reported by MRCTV, the migrant caravan includes countless prior deportees, not just women and children fleeing poverty and gang violence in Central America.

It has also been reported that there are migrants from the Middle East that have made their way into the caravan.

Department of Homeland Security (DHS) press secretary Tyler Houlton on Twitter Tuesday confirmed those reports and also said that the department "can confirm that there are individuals within the caravan who are gang members or have significant criminal histories." 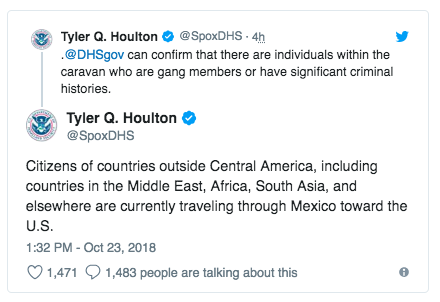 "The statement by the DHS reinforced an earlier tweet from President Trump, in which he maintained that the caravan included 'criminals and unknown Middle Easterners,'" reports Fox News.

Vice President Mike Pence said on Tuesday that Honduran President Juan Orlando Hernández gave him information that the caravan was organized by "leftist groups" in Honduras financed by Venezuela.

President Trump has threatened to cut off or substantially reduce foreign aid to countries, such as Honduras, Guatemala, and El Salvador, for failing “to do the job of stopping people from leaving their country and coming illegally to the U.S.,” he tweeted on Monday.

He has vowed that the caravan will not make its way across the border.

The Rasmussen survey of 1,000 likely U.S. voters was conducted Oct. 21-22 and has a margin sampling error of 3 percentage points.