American University’s Center for Diversity & Inclusion hosted an event on Tuesday dedicated to helping white people overcome the “obstacles” that prevent them from participating in anti-racist activism, which included separating attendees based on race.

The event, “But I’m Not a Racist,” was part of the Center for Diversity & Inclusion’s “White People and Anti-Racism” series. The event was also cosponsored by Housing & Dining Programs and Greeks United for Inclusion, Diversity, & Equity.

“And one of the ways we’re going to split you up today is we’re going to ask white folks, or white identified folks, folks who identify as white in some way, to pair up with other white folks and for folks of color to pair up with other folks of color. And this might sound really weird, but we have a reason for doing it. And the idea behind what we call caucusing is to create what I like to call a ‘brave space’ rather than a safe space, where we can ask a lot of honest—be really honest with ourselves and also ask a lot of difficult questions that are probably going to make us feel uncomfortable.”

Sean explained one of the points for separating people based on gender is so “people of color” don't have to “do the hard work themselves,” asking:

“And while we’re doing that, avoid placing the burden on people of color to educate us and to come up with problems and solutions and instead, have white folks do the hard work themselves. And also it’s because we want to reflect on what it means to be white, what it means to do anti-racist work as white folks. So we’re kind of talking around that identity and what that means, right? And sort of critically reflecting on that, right? What does it mean to be white in a largely white-dominated society at a largely white-dominated university?"

“I am very sure that you all can, like, caucus around your own identities. That might be talking to folks and being like, ‘Hey, you know, white group over here,’ or ‘Folks of color over here,’” Bruno suggested.

During the presentation, people were given definitions of words such as “whiteness” and “privilege” so everyone was using a “common language” with the same definitions. 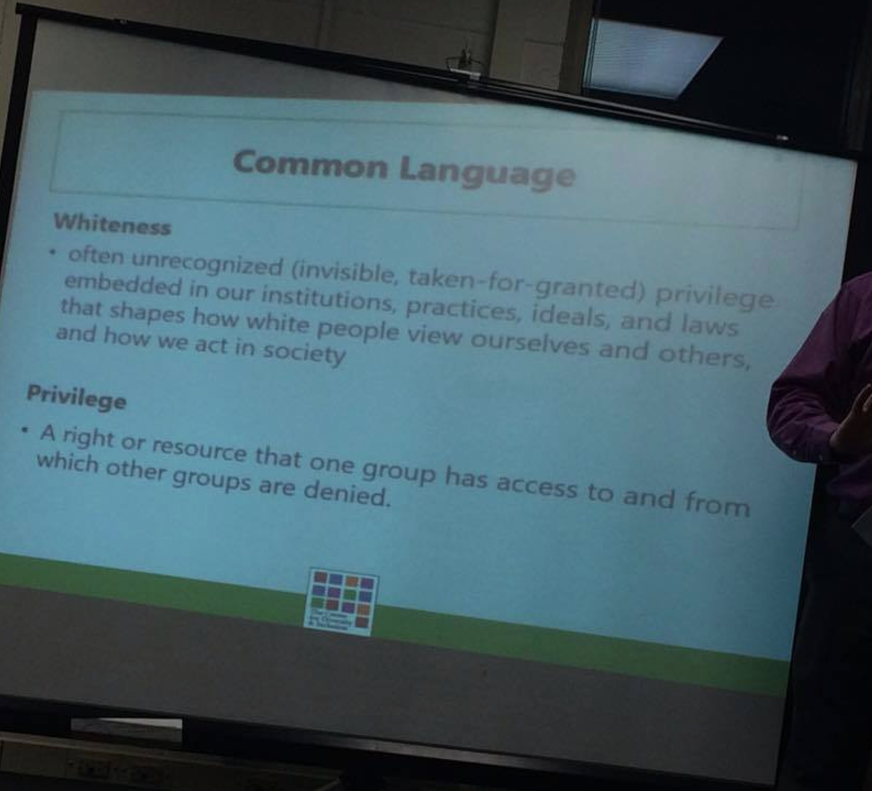 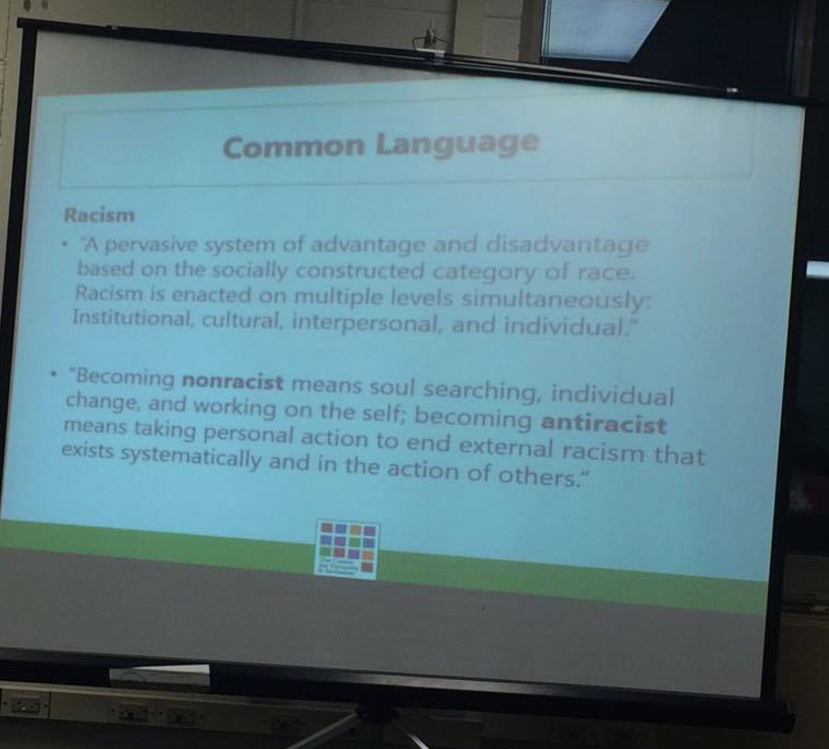 While discussing the definition whiteness, Bruno said it “connects really nicely to privilege. And privilege is all about access to resources and access to do things you have because of an identity that you hold. So for white folks in this space, having white privilege means that you don’t actually, potentially before today, have ever had to think about whiteness. But for folks of color in this room, thinking about race is a daily, a daily thing, right? And for white folks, sometimes we don’t think about it for years because it is so embedded in our lives, in our institutions, in our media.”

During the event, participants were asked to explain how the phrase, “I just think of people as people” contributes to racism. Attendees were asked to reflect on how two statistics from a MTV survey on racism are allegedly contradictory: “78% of millennials say that everyone has a responsibility to help tackle bias” and “70% of millennials say they don’t see racial minority groups any differently than they see white people.” 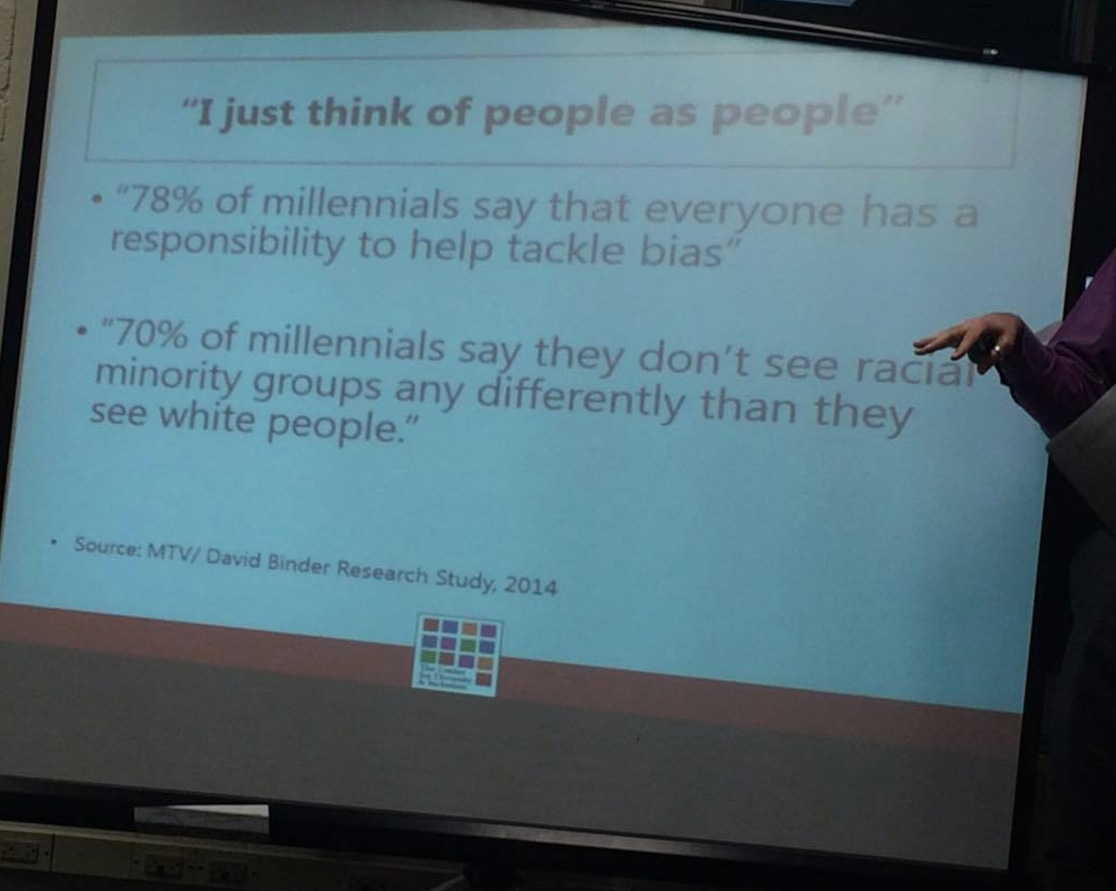 The “obstacles” white people allegedly face when they’re trying to participate in anti-racism “work” include believing in “’color-blindness’” (emphasis theirs), believing in the “myth of meritocracy” (reportedly the idea that if someone earns something, you have to earn it too), feeling “guilt/shame,” and trying to come up with “Perfectly Logical Explanations” to explain why certain situations arise. 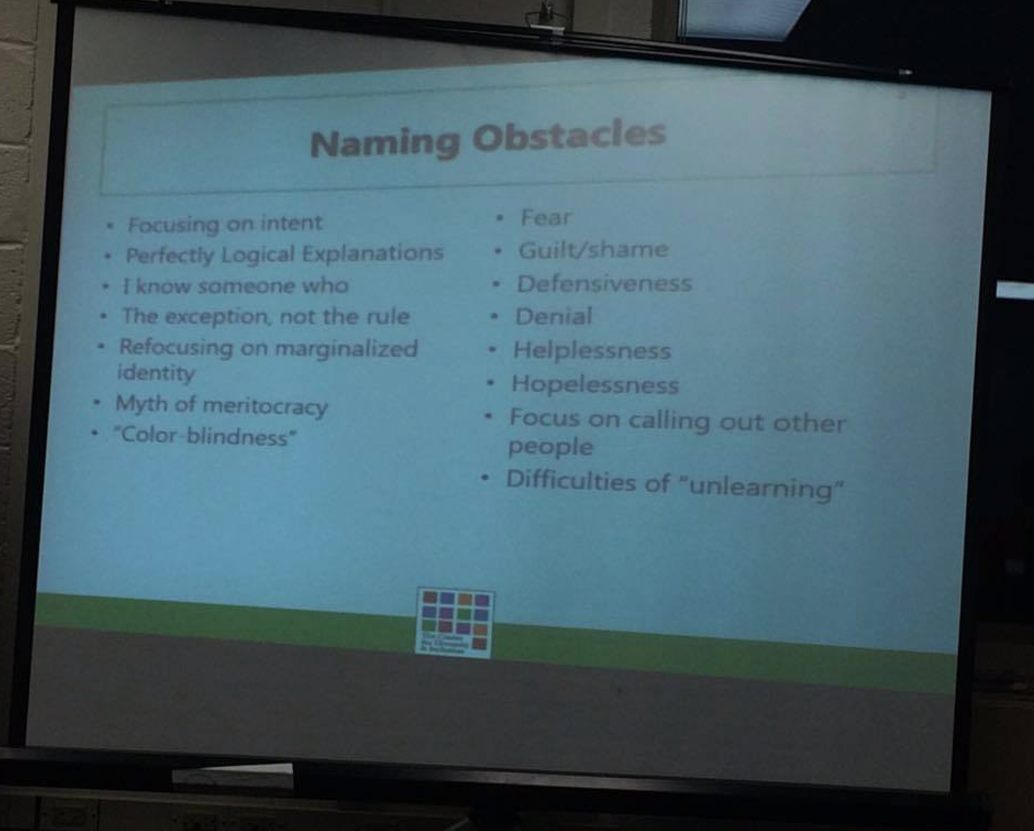 The “strategies” for white people to get more involved in anti-racism work includes thinking about impact, not intent.

“So if you’re like, but my intentions were good, stop. Breathe. And then don’t say it. Right? Because again, it’s not about that. It’s about how we are impacting other people. And when we’re talking about conversations around race and for white folks in the room, an obstacle is always about how we feel about  what we do that is horrible, right? And we need to get over that like, real quick,” Bruno explained. 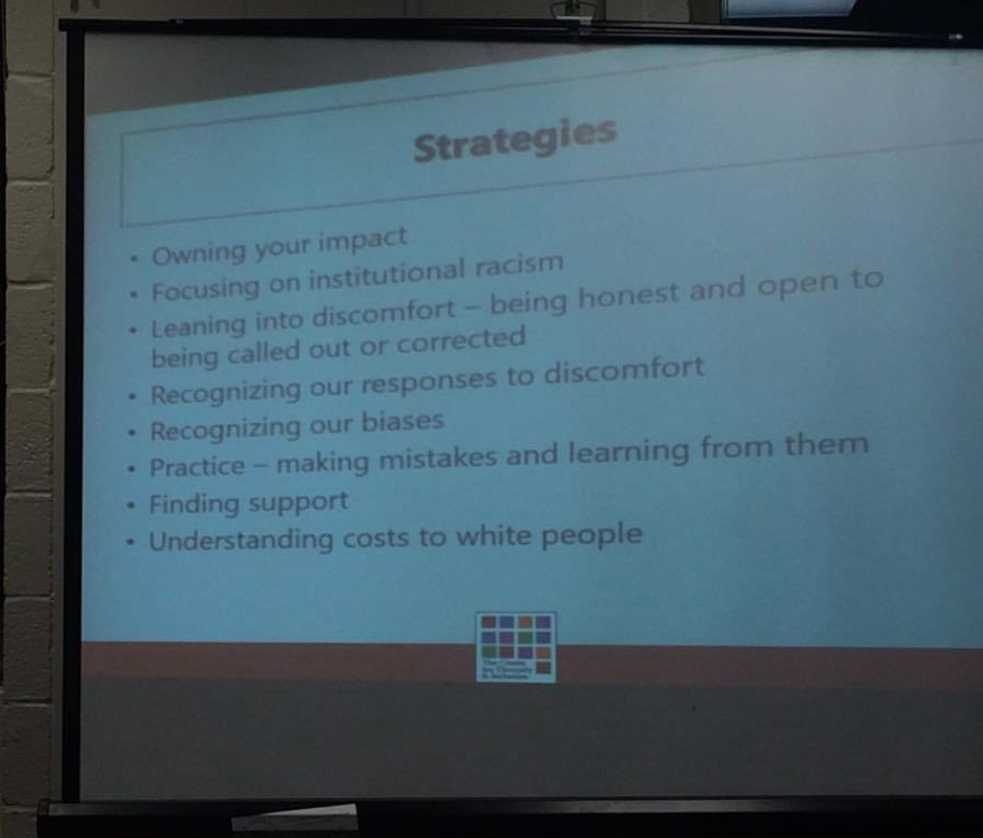 Bruno also emphasized the importance of apologizing and dealing with being “called out” without taking offense, even if someone is angry and yelling.

“Like I can’t expect folks of color to think of me as a good person and not respond by like calling me out and yelling at me, right? Sometimes, like the daily existence of going through things, whether they be overt hostilities, or daily microaggressions that happen, you might just be the last straw and yelling happens. And then for white folks, it’s like, let me take a step back. As opposed to getting defense in that situation, be like, ‘What did I do that I probably shouldn’t have done in that situation?’”