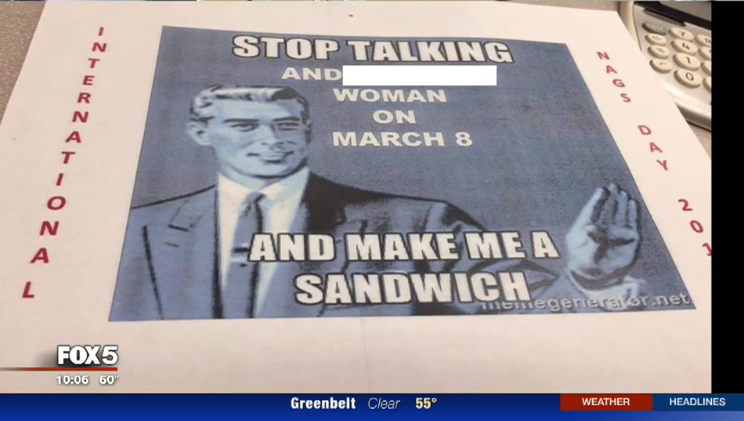 American University police are investigating anti-feminist fliers placed around the school as a hate crime because they were allegedly specifically “targeting women,” including female faculty.

The Eagle, American’s student publication, reports the fliers read, “International nags day 2017” and included a meme of a man saying, “Stop talking and bitching woman on March 8 and make me a sandwich.”

The Eagle claims the posters were placed on various building on campus, including Mary Graydon Center, McCabe Hall, the McKinley building and the Kogod School of Business.

After the posters were discovered, American sent out a crime alert about the “vandalism-hate.”

In the crime alert, the police told individuals they should report any information or suspicious activity to law enforcement. They also included surveillance images of the person they believe is responsible.

Not only did the posters warrant a crime alert, the university administration was swift to condemn the “hostile posters.”

In an email sent from Provost Scott Bass, Bass condemned the posters as “misogynistic, disrespectful, and divisive.” Bass went on to say American is “no place for such hostility and disrespect”:

Early this morning, posters denigrating women and International Women’s Day were placed widely across campus. We condemn the messages as misogynistic, disrespectful, and divisive. Our university is no place for such hostility and disrespect.

In addition to the condemnation from the university provost, Kogod School of Business Dean John Delaney also issued his own personal message denouncing the “misogynist, disrespectful, and divisive” posters”:

Early this morning, posters that appeared to denigrate women and International Women’s Day were posted widely across the Kogod Building. On behalf of the Kogod community, it is important for me to say that such messages are misogynist, disrespectful, and divisive. Kogod is a strong and vibrant school because of our diversity. We benefit tremendously from the efforts of many talented women who are here as students, staff, and faculty. This is not the place for such disrespect to be shown. We must stand together to overcome hate and ignorance.

Some students at American appear to have been unaware the posters were even put up until the university responded.

One student told Fox 5 DC, “It’s good that they called attention to it because if they hadn’t, then we probably wouldn’t have even known that posters were put around campus.”

Another student said, “We do have a pretty strict code of conduct. They actually just added in a new clause, last week, which prohibits discrimination against certain groups and makes that a more serious offense. So, definitely upsetting. I was glad that the school reacted to it quick enough--I mean, you can interview a bunch of people, and a lot of people didn’t even see it.”

According to Fox 5 DC, all posters put up on campus need to be approved and sponsored by the university and placed in specific locations on campus.

American University senior public relations manager Ericka Acosta told MRCTV the fliers are being investigated as a hate crime because they specifically targeted women, including female faculty in the Kogod School of Business.