What’s real anymore? Is there a single politician that’s trustworthy in the least at this point in the dysfunctional paradise known as Washington D.C.? Even if a politician was to slip up and actually say something true, would the people believe them? Or have they so sullied their own names that the mere mention of them brings reflux to mind?

So many questions, and no concrete answers.

Remember how socialist Rep. Alexandria Ocasio-Cortez (D-N.Y.) has been telling anyone who will listen about her terrifying, near-death experience during the Capitol riots? And how Sen. Ted Cruz (R-Texas) almost had her "murdered?"

It turns out, according Rep. Nancy Mace (R-S.C.) and others, that Ocasio-Cortez wasn’t even in the Capitol building during the events of January 6. Ocasio-Cortez was at the Cannon Building, where her office is.

“My office is 2 doors down,” Mace wrote in a Tuesday Twitter post. “Insurrectionists never stormed our hallway. Egregious doesn’t even begin to cover it. Is there nothing the MSM won’t politicize?”

.@AOC made clear she didn’t know who was at her door. Breathless attempts by media to fan fictitious news flames are dangerous.

My office is 2 doors down. Insurrectionists never stormed our hallway. Egregious doesn’t even begin to cover it. Is there nothing MSM won’t politicize? pic.twitter.com/Tl1GiPSOft

Should Mace also be asking the same question of Ocasio-Cortez? If the report that she wasn’t actually in any kind of danger turns out to be true, then it would seem that Ocasio-Cortez used the Capitol riots as a way to elicit sympathy from people for incidents that never happened.

In addition to Mace’s claim, journalist Jack Posobiec posted what he called a “Fact-check” on Twitter concerning Ocasio-Cortez’s pushback that she was “on the Capitol complex” while never denying that she was “in the Capitol building.”

Here’s Posobiec’s tweet, along with a screenshot of the map he posted:

Ocasio-Cortez responded by, again, not denying that she wasn’t in the Capitol building during the riots:

This isn’t a fact check at all. Your arrows aren’t accurate. They lie about where the mob stormed & place them further away than it was.

You also fail to the convey *multiple* areas people were trying to storm. It wasn’t 1. You also failed to show tunnels. Poor job all around.

For once, people on Twitter grew a backbone and began a trend that would make comedian Dave Chappelle chuckle — #AlexandriaOcasioSmollett. The hashtag is in reference to actor/activist Jussie Smollett's alleged hate crime hoax in early 2019 in which he claimed that Trump supporters attacked him while he walked to Subway for a sandwich at 2 a.m. in 20-below temperatures and also claimed that the attackers told him the Democrat stronghold of Chicago was "MAGA country."

That’s not a joke. Take a look: 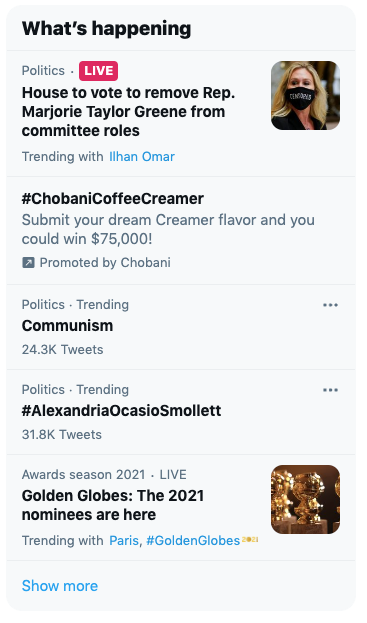 Whatever the truth is, it’s a fact that Ocasio-Cortez hasn’t denied not being in the actual Capitol building. Who knows what to believe anymore?