Shapiro had previously offered the Democratic socialist $10,000 toward her campaign or raise money for charity if she agreed to publicly debate him.

Hey, @Ocasio2018, what do you say? pic.twitter.com/lKDtmMc8Us

After a couple days of silence, Ocasio-Cortez ultimately spurned Shapiro's offer late Thursday by saying she “[doesn’t] owe a response to unsolicited requests from men with bad intentions.” 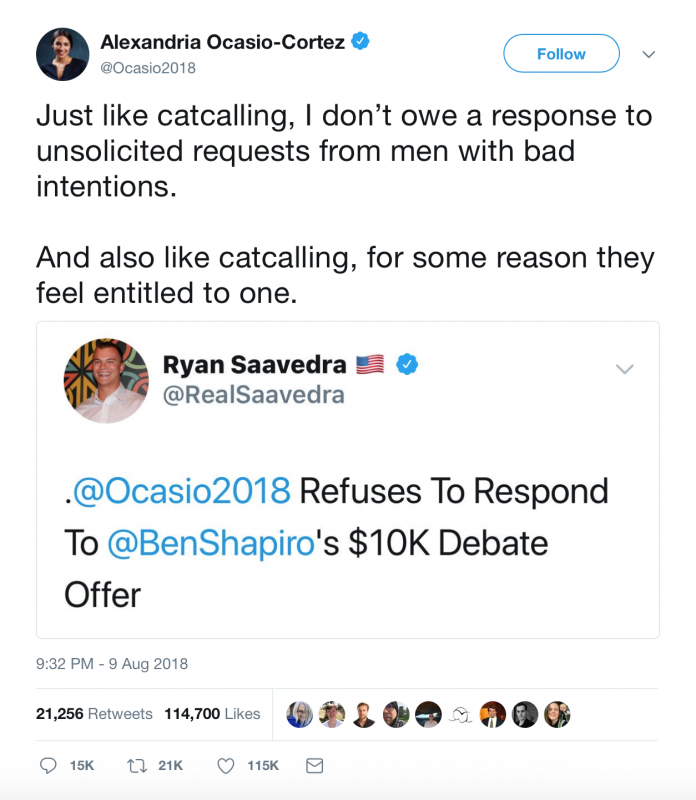 The response fired off a slew of criticism from those on the right and even some on the left, all of whom were quick to point out that an offer for a political debate isn’t “catcalling.”

You know what's bad faith? Accusing conservatives of not wanting to debate you, then pretending @benshapiro sexually whistled at you... because he asked you to debate.

FYI my team has also asked you multiple times to come on my show & debate. And you won't. https://t.co/kTh7v4x64y

Crying sexism in order to avoid a debate of ideas is not a feminism I want any part of.

Intersectionality means you don’t have to engage ideas. https://t.co/glktwHIsO1

What bad intentions? A serious discussion that raises money for charity? This is just embarrassing. https://t.co/EfYdiDWSLm

While Ocasio-Cortez may have enjoyed a string of national interviews since her primary victory over 10-term Democratic incumbent Joe Crowley in July (a win she credited largely to his refusal to debate her), her resistance to a public debate over her ideas strongly suggests Democratic socialism only holds up inside its own echo chamber.