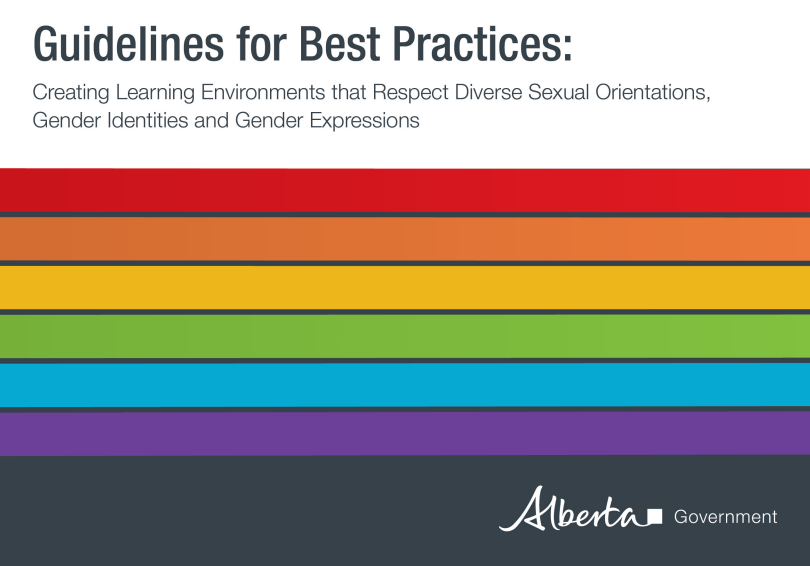 The “Guidelines for Best Practices: Creating Learning Environments that Respect Diverse Sexual Orientations, Gender Identities and Gender Expressions” asserts there is an “individual’s right to self-identification” and that “an individual’s self-identification is the sole measure of their sexual orientation, gender identity or gender expression.”

The guidelines state that children have a right to pick their own pronouns and require staff to respect those choices:

All individuals have the right to be addressed by their chosen name and to choose pronouns that align with their gender identity and/or gender expression. This is true whether or not the individual has obtained legal documentation of a change of name or gender designation (e.g., Birth Certificate). Further verification of identity, such as medical records, is not required.

Some individuals may not feel included in the use of the pronouns “he” or “she” and may prefer alternate pronouns, such as “ze,” “zir,” “hir,” “they” or “them,” or might wish to express themselves or self-identify in other ways (e.g., Mx. instead or Mr., Mrs., Ms., or Miss, or no prefix at all).

According to the guidelines, “School staff may use a student’s chosen (i.e., preferred) name and pronouns on report cards or individualized program plans or other school issued documents, provided the student has requested this.”

Schools can also change a student’s gender on records without “documented proof.”

For dress codes, which are traditionally different based on gender, the guidelines state schools cannot have dress codes that imply that an item of clothing can only be worn by one gender:

Schools and school authorities proactively review existing dress codes to ensure they are respectful and inclusive of the gender identities and gender expressions of all members of the school community (e.g., rules apply equally and fairly to all students and are not gender-exclusive, such as implying that a certain type of clothing, such as skirts, will be worn by one gender only).

Reduce gender-segregated activities to the greatest extent possible. This increases opportunities to respect students’ full expression of who they are and allows them to play, learn, dress, present and express themselves in flexible and diverse ways that are congruent with their gender identity or gender expression.

When there are segregated educational, recreational or competitive activities, students who are trans and gender-diverse have the right to participate in these activities in ways that are safe, comfortable and congruent with their gender identity or gender expression.

The “safe, comfortable” environment will be created by ending “boys versus girls” competitions:

Schools work to reduce or eliminate the practice of segregating students by gender as much as possible. For example, they avoid structuring courses or activities based on gender-specific roles such as “boys” versus “girls” in academic, athletic or talent competitions.

Gay and trans students can also choose to participate in extra-curricular activities in a way that makes them feel “comfortable”:

All students participate in extra-curricular activities in ways that are comfortable and supportive of their diverse sexual orientations, gender identities and gender expressions (e.g., if sports teams are divided by gender, students are given the opportunity to participate on the team that reflects their gender identity and expression).

The end of gender segregation also extends to restrooms. Under the new guidelines, trans students are able to choose which restroom they would like to use based on their “gender identity.” Trans students can also choose to use a non-gendered single stall restroom.

Even in human sexuality courses, trans “students are able to choose which class they participate in.” According to the advocates for trans rights, however, sex is not the same thing as gender.

All of these policy changes to cater to collective groups will be in addition to creating supports that “respond to a student’s individual needs.”

These supports include the demand that “No student or family should be referred to programs which purport to ‘fix,’ ‘change’ or ‘repair’ a student’s sexual orientation, gender identity or gender expression.”

This requirement raises the question of whether a student would be referred to such services if he or she requests it.