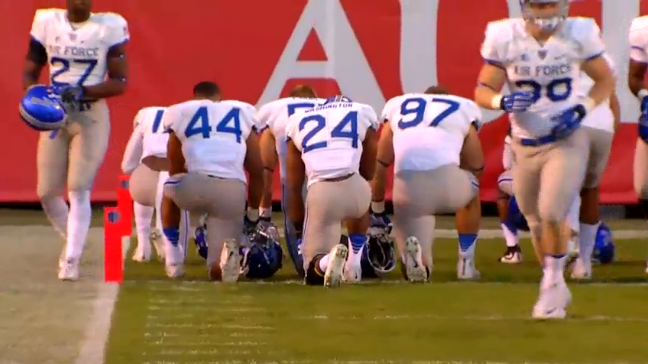 Mikey Winstein, president and founder of the MRFF, took issue with the practice following the Mountain West Conference Championship game on Saturday night against the San Diego State University Aztecs.

Before the game, several Falcons were seen lining up to pray. Winstein called the scene “a disgrace” and “a putrid example of fundamentalist Christian supremacy.”

“It’s a disgrace,” he said. “It’s a putrid example of fundamentalist Christian supremacy, triumphalism and exceptionalism and it has to stop.”

“Those individuals that are dressed in the Air Force uniform,” he went on, “that’s their uniform of the day. They’re members of the military and they are under different rules than the civilian counterparts they’re playing on the field."

MRFF argued that the public prayer pressures non-Christians in the bleachers and on the field to participate against their will.

"We have families of players, we have players, we have girlfriends of players, we have staff and faculty 144 strong at the Academy. They’re terrified to go forward and go up the chain of command or to file an official complaint for fear of facing reprisal or retribution,” said Weinstein. “They should not be coerced in any way, shape or form to publicly sit there and engage in a massive team prayer for one particular version of Christianity.”

NBC San Diego reports that the MRFF and several active-duty and retired Air Force officers are not only concerned about the alleged pressure non-Christian players face when their teammates line up to pray, but also the “optics” of future Air Force officers praying “en masse.”

“This issue may go well beyond the football field,” writes the local NBC affiliate. “In a series of emails published anonymously by the MRFF, both active-duty and retired Air Force officers warn that the sight of Air Force players praying en masse can be used as propaganda by groups such as ISIS and al-Qaeda in the Arabian Peninsula to drum up more anti-American support.”

"The optics are not just bad but potentially deadly," wrote one Air Force general.

“If our Islamic Extremist propaganda experts use a little imagination, the images of cadets praying together on the football field can be equated to servicemen and women conducting a crusade on Middle Eastern battlefields,” wrote another.

Video leading up to the big game shows players voluntarily lining up in the end-zone to pray. Others who did not wish to participate in the prayer clearly did not have to, as they were seen continuing on with their warm-up routines.

The Air Force Academy announced this week a formal investigation into the MRFF complaint:

"The United States Air Force Academy is attentive to all religious freedom concerns, and we are conducting an inquiry into the complaint," the school said in a statement. "The Air Force is dedicated to maintaining an environment in which people can realize their highest potential, regardless of personal religious or other beliefs.”

The MRFF has threatened to pursue a federal lawsuit if the Air Force Academy fails to adequately address its concerns.