The Anti-Defamation League (ADL) appears to ignore the hate that comes from communist activist groups, like Antifa. Instead, the ADL chalks up the disagreement with Antifa to white supremacists.

That’s right. If you use “anti-antifa symbology” you’re most likely part of a “white supremacy group. Never mind that Antifa is an intentionally violent organization.

Although white supremacist animus is often thought of as being directed against religious, racial and ethnic minorities, a significant portion of their hateful rhetoric is directed against the political left, including both the mainstream and far left[…]

White supremacists have coined the term “anti-antifa” for themselves.  Some anti-antifa symbology simply re-imagines earlier anti-SHARP imagery, such as overlaying a red circle and diagonal bar on top of a common antifa symbols such as side-by-side red or red and black flags (derived from the logo of the 1930s German anti-fascist group Antifaschistische Aktion) or three downward-facing arrows (originating with German and Austrian Social Democrats opposing Nazism in the 1930s).

Obviously not, but you get the lack of logic used by the ADL to make such a moronic statement.

Here’s an image from the ADL website of the “hate symbol” they’re pushing: 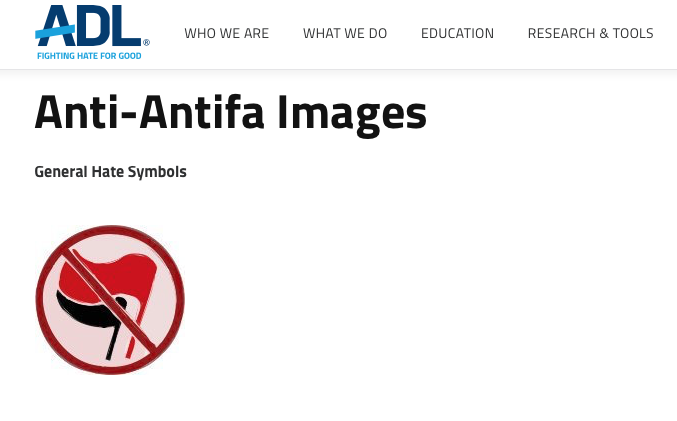 There are other images that the ADL use as examples of what constitutes an anti-antifa hate symbol. Those may have white supremacist ties, and they might not. But the ADL chose to focus its "hate symbol" designation on the benign symbol above. You can view the other symbols at the ADL link earlier in the article.

They also spoke of the “violence against left-wing activists” that symbols like an anti-Antifa symbol might invoke. But what about the actual violence that members of Antifa and other radically left groups practices just for someone taking their picture or disagreeing with their stances?

It looks like yet another case of “do as I say, not as I do” for the radical left, which is growing by the day. I guess propaganda and brainwashing works — at least for people who are easily led.