As much as $81 million was donated to Bill and Hillary Clinton's foundation by wealthy one-percenters who hid money in Swiss bank HSBC tax-haven accounts, The Guardian has revealed.

Colorful British fashion magnate Richard Caring donated $1 million for Bill Clinton to where an elaborate costume of a Russian general and attend a “lavish fancy-dress party in Russia,” The Daily Mail reports. 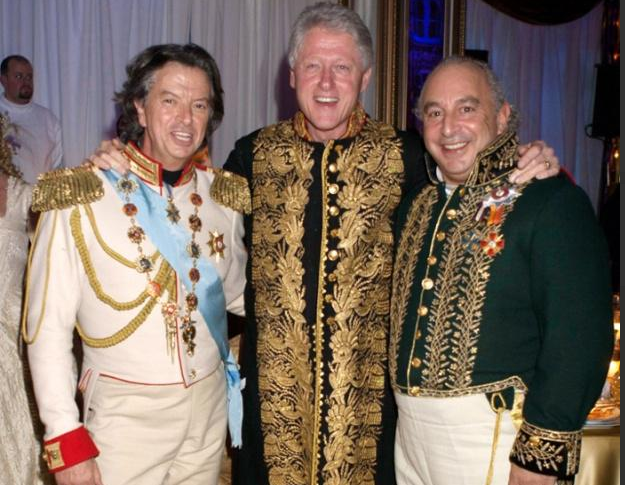 Convicted sex offender Jeffrey Epstein donated $25,000 to the foundation in 2006, the year after he was arrested for sexually abusing a 14-year old in Florida. Epstein also flew President Clinton in his private jet.

While these wealthy donors were not violating the law by placing their money in these Swiss HSBC accounts, Schumacher admitted to a reporter that he and other wealthy foreigners would leave Switzerland if the country halted its tax policies that they use to escape taxes in their home countries.

“One of the issues that I have been preaching about around the world is collecting taxes in an equitable manner, especially from the elites in every country,” Hillary Clinton said at the Clinton Global Initiative in 2012, while still Secretary of State. “[The elites]… do not contribute to the growth of their own countries. They don’t invest in public schools, in public hospitals, in other kinds of development internally.”

“And so it means – for leaders – telling powerful people things they don’t want to hear,” said Hillary Clinton. Increasingly Clinton has attempted to sound a populist tone with voters. Here's her tweet after Obama’s State of the Union address:

@BarackObama #SOTU pointed way to an economy that works for all. Now we need to step up & deliver for the middle class. #FairShot #FairShare

But the revelation that wealthy tax dodgers were among her foundation’s biggest contributors could prove disastrous for her presidential aspirations, which may be why she has been “lying low.”