60% of Americans Said They Gained Weight During the Pandemic

More than 60 percent of Americans say they gained weight during the past year’s COVID lockdowns, an interesting fallout from government-imposed shutdown mandates supposedly meant to protect people against a disease that disproportionately affects the elderly…and the obese.

According to a new survey published by the American Psychological Association, 61% of U.S. adults said they packed on the pounds during the pandemic, largely due to being shuttered inside their homes, working in sedentary positions, copious snacking and ordering large amounts of delivery.

And while only 39% of men said they’d gained weight compared to 4% of women, the men tended to gain more, packing on an average 37 lbs. during the shutdown compared with a 22-lb. average among women. 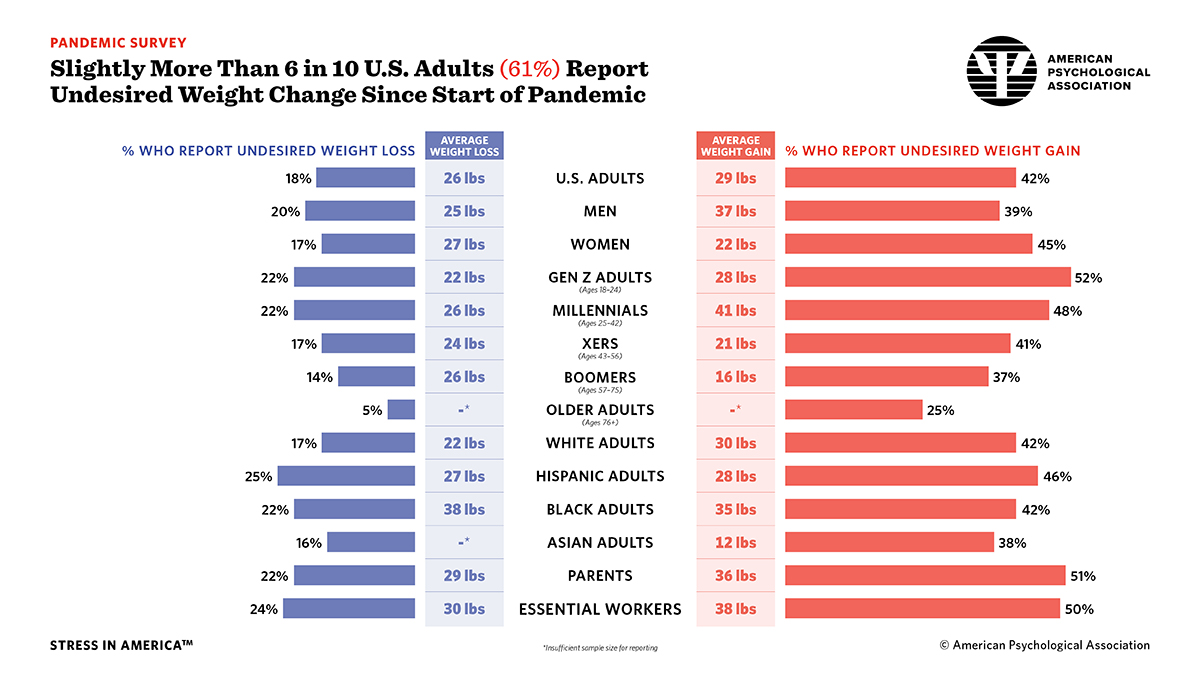 Generationally speaking, while weight gain was reported across the board, it looks like younger people fared worse than older Americans. While slightly more than a third of Boomers said they’d added on a little extra padding around the middle, 52% of Gen Z adults and 48% of Millennials said their scale numbers had gone up. Millennials also reported the highest average weight gain at a stunning 41 lbs.

Perhaps most discouraging is the fact that 50% of “essential workers” – including many who dealt with the public on a daily basis and were at a higher risk of catching COVID – said they’d gained weight.

And while it’s hardly a shock to see people’s BMI trending upward after being told to stay inside their homes and support struggling small businesses through copious amounts of takeout, it’s worth noting that the massive across-the-board weight gain among U.S. adults – and, most likely, their kids – isn’t a positive after-effect of a pandemic that’s shone a spotlight on the risks of being overweight….

…and of the government deciding what’s best for your health