Dumb Tweets were in good supply this week as half of the country collectively lost their minds over Indiana's Religious Freedom Restoration Act. That outrage drowned out some of the other dumb stuff that happened on Twitter this week that you may have missed, so here are a few of the dumb things that were being Tweeted out while most of Twitter was hyperventilating over gay wedding cakes. 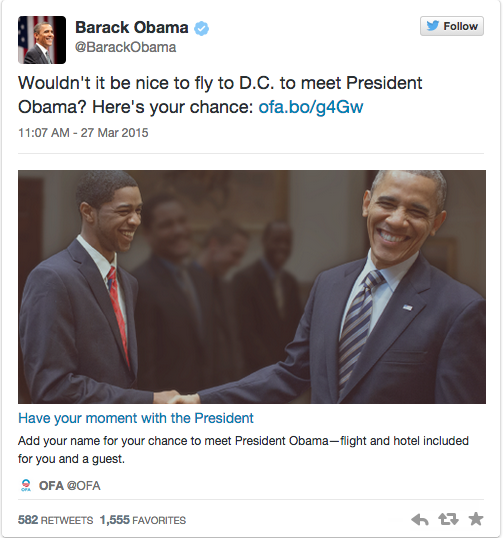 This is the President's Twitter account, so I can only assume that President Obama is saying, 'Hey, wouldn't it be great to meet me? I'm awesome!'

It doesn't get much more narcissistic than that.

And how about that picture?  That poor kid is obviously experiencing a seminal moment in his life.  He's meeting the President of the United States and Obama isn't even looking at him!  Maybe, there was a mirror nearby.

Truthfully, we all know that President Obama doesn't actually manage the Twitter account with his name on it. He probably has Joe Biden do it. I can see Joe Biden sitting in his racecar bed with his IPad and Tweeting for Obama. (Which is honestly as close to being president as he's ever going to get.) Then Biden goes back to playing Angry Birds.  Another hard day's work! 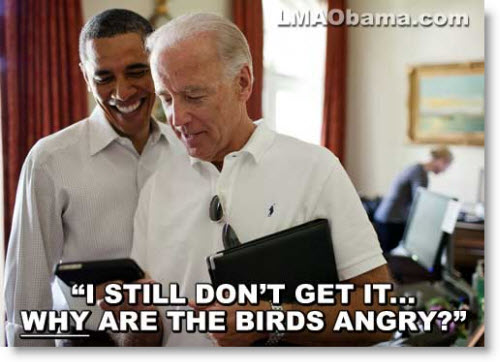 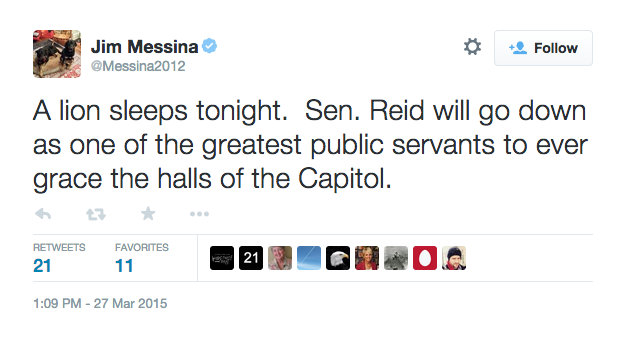 So, President Obama's former campaign manager gets really, really high when he Tweets.  So what?  Pot is legal in DC now.

Harry Reid will go down as one of the great villains of American politics during the Obama era, but he was very successful in protecting Obama from having to take a stance on all of those scary pieces of legislation that Harry Reid kept from getting to his desk.  Plus, Mitt Romney lost, right?

But who knows? Maybe Jim Messina has a genuine affection for Reid. I wouldn't put it past a guy who oozes as much creepy as Messina does.  Remember this? 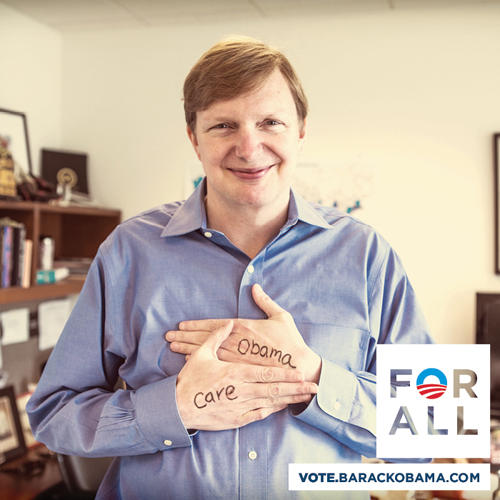 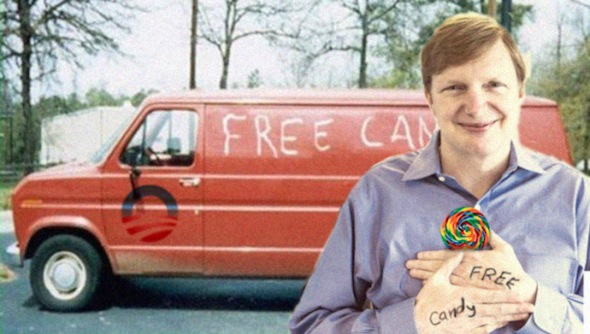 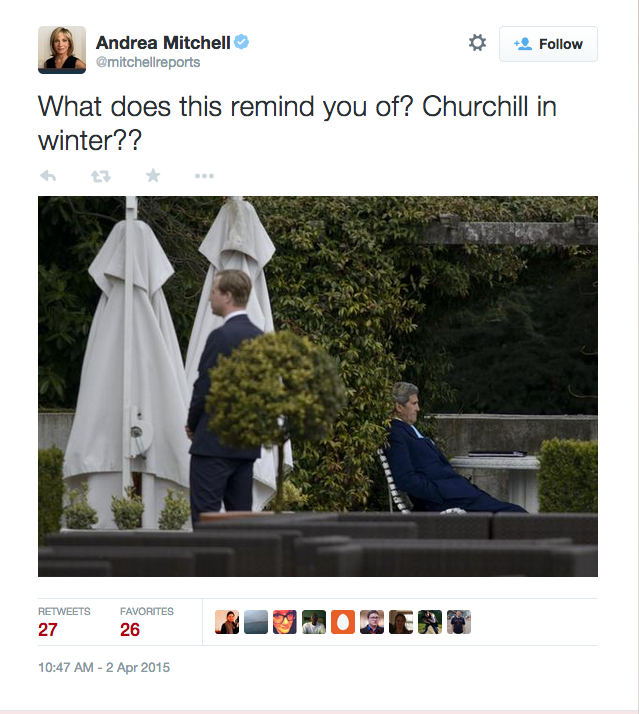 It reminds me more of a young me, sitting in time-out after doing something stupid.  Like that time I made a terrible deal with Iran involving their nuclear capabilities.  My mommy made me sit in the naughty chair and think about what I had done. And I did.  Then, I realized just how foolish I'd been and it made me sad.

But, the real irony here is that Andrea Mitchell is comparing the world leader who was largely responsible for ending World War II to the guy who just made a deal that could start World War III. 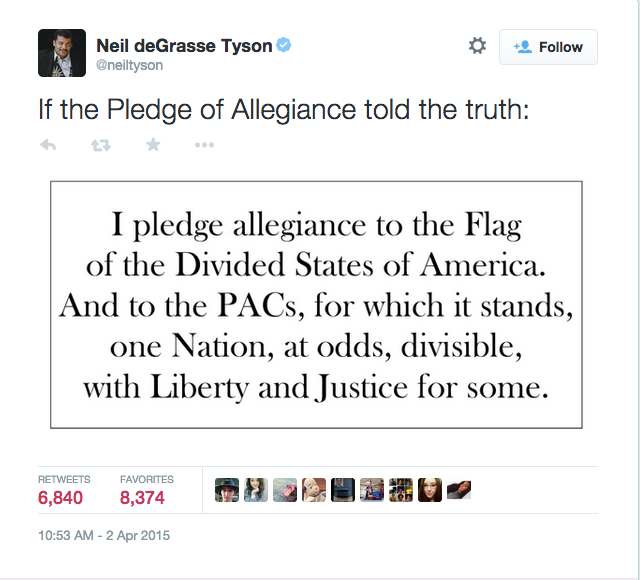 You know how some people get all testy when someone questions whether or not they love their country.? Well, at least Tyson isn't ashamed of saying he doesn't.  You have to respect his forthrightness.

Because of his honesty I feel like we should help Mr. Tyson get out of this Hell hole of a nation.  He's an astronomer.  Let's all pitch in, buy Neil a rocket and shoot him into space.  Everybody wins.

But here's the thing: we'll need that rocket back.

But, while you're up there, maybe you can unravel some of the great mysteries of the universe, like why you're famous and why it is that so many people seem to take your views on political matters seriously? 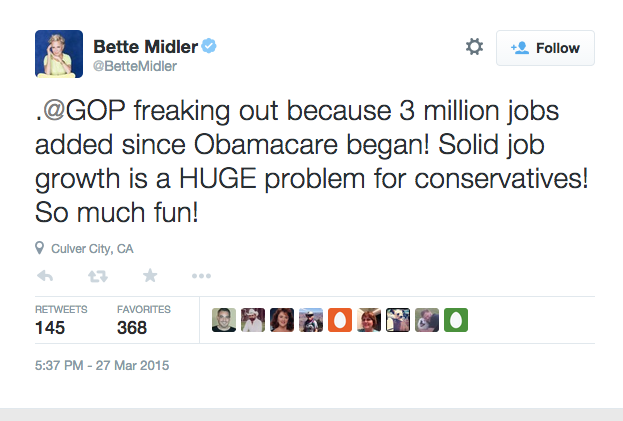 Yes! Job growth is SO "solid!"  And it only took six years of sub-par economic growth, sky-high unemployment and a record number of people leaving the workforce to get there.  Oh, and also, Friday's jobs report for March found that only half the jobs that they expected to materialize were actually created, so this economic juggernaut that Bette seems to think we've been experiencing for the last five months or so may be coming to an end.

Bette is being very cynical.

No one wants the economy to suffer, regardless of ideology.  A bad economy affects everyone (Except for Bette Midler who is a millionaire and doesn't have a business or a serious career that depends on people spending money in order for her to live comfortably.)

It's also curious that Midler is connecting these job increases to Obamacare.  How exactly does that work?  Did employers suddenly start hiring once they found out that they were about to be hit with a bunch of onerous new regulations and higher health care costs?

I mean, 5.4 million jobs were created from the time the Iraq War began up until the six-year mark in George W. Bush's presidency. Would Bette credit the war for creating all those jobs?

I wouldn't.  Because that would be stupid.

Ashack is an economist for the Bureau of Labor Statistics. After this was posted on her Twitter account, she claimed she was hacked.  Then, the Tweet was removed.  Then, her entire Twitter account disappeared. What happened to her?  Perhaps, she was kidnapped by the Indiana Schutzstaffel.

Seriously, though, can we all please stop comparing laws and politicians we don't like to Nazis? The only person in history comparable to Hitler is Hitler.  Implying that conservatives want to throw gays into gas chambers really does nothing to further the debate over the limits the First Amendment.

Dumbest Tweets of the Week