Today's selection of dumb Tweets come in the wake of the second GOP debate. Surprisingly, liberals didn't care much for it.  But liberals had another hissy fit this week when a kid brought a clock to school and was arrested because school authorities thought it resembled a bomb. The kid was a Muslim, so this gave the left another opportunity to make the issue about race and, what they view, as our nation's widespread penchant for "Islamaphobia." So, as in all cases where there's an opportunity to politicize something that could further the narrative of pervasive racism in America, President Obama invited the kid to the White House. 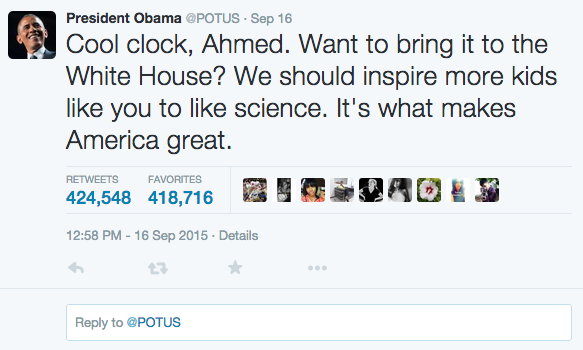 Apparently all it takes to get a White House invite these days is to build a device that tells time. I'm guessing if this kid built a device that calculates the national debt, he probably would have not been given such a warm reception by Obama. Additionally, if the kid had been white and named "Christian Jesuslover" I'm guessing the left would be condemning the kid for being stupid enough to bring something into a school building that looked like this: 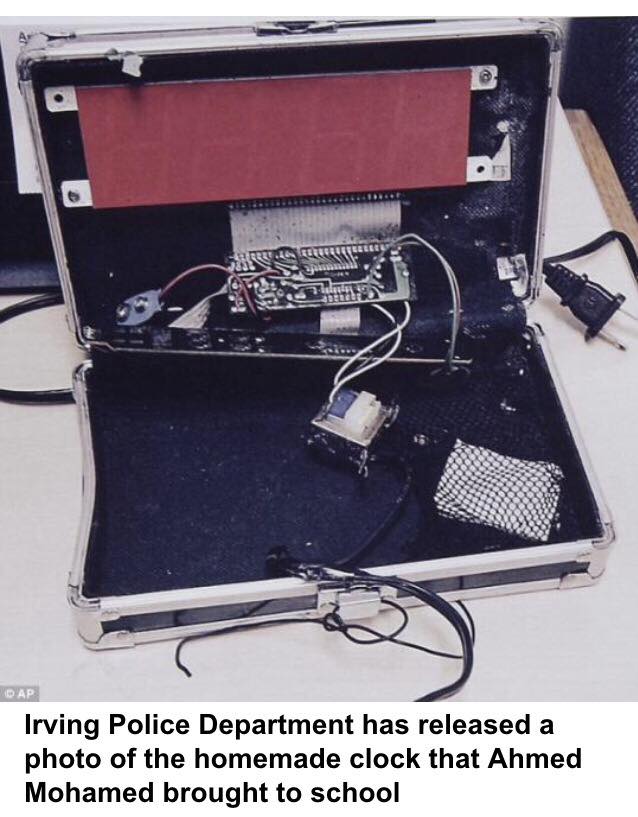 Now, maybe I'm an intolerant Islamaphobe, but if anyone tried to bring something that looked like that into the White House, regardless of their ethnicity or religion, I'm guessing that they would be in GITMO, right now.

That looks enough like a bomb to arouse suspicion in any sensible person. Particularly in the era of senseless school shootings and acts of terror like we saw in Boston.  But, in the Obama era, this type of incident is cause for celebration. I'm sure the kid did not intend to cause a bomb scare or left wing outrage.  Hopefully, TSA agents won't feel the need to worry about the PC police if someone tries to bring something like this through airport security and tells them 'It's just a clock.'

Get a watch, dude. 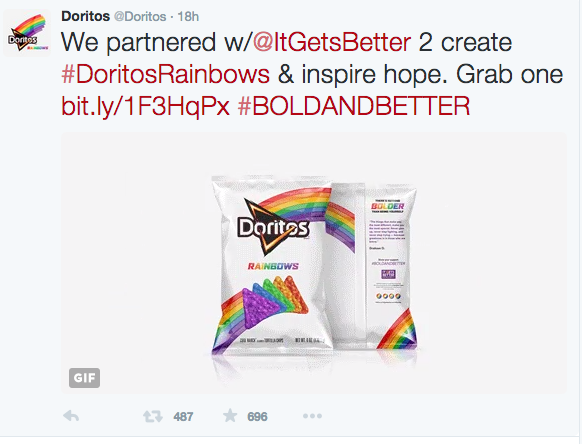 First of all; BLECH!.  This reminds me of the time that that Heinz released all of those colored brands of ketchup and the nation responded by simultaneously retching. 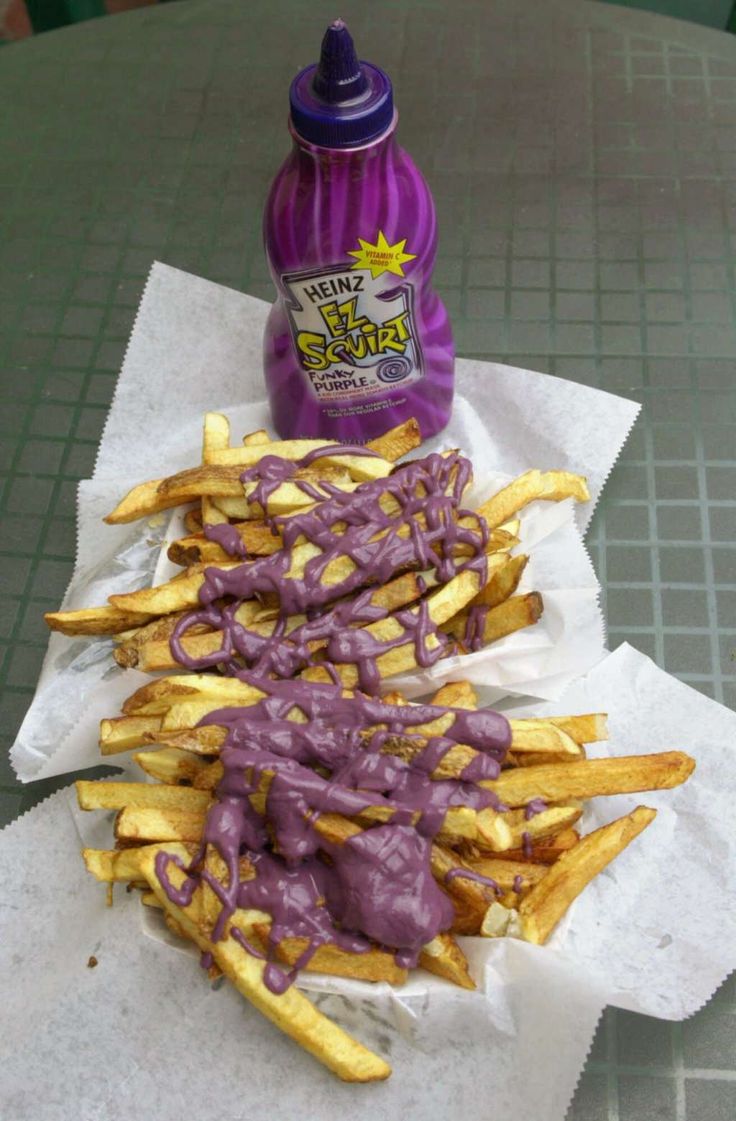 Even stoners wouldn't eat a bright green Dorito. They look like they were exposed to a radioactive disaster. ' Introducing, Doritos "Chernobyls"'!!!!

This is pandering at its finest.  I'm pretty sure that there's very little demand for a gay tortilla chip. Gay men are well known for being in immaculate shape.  They aren't going to risk their abs because Frito-Lay has pledged its solidarity with the gay rights movement.

Buy a bag now. They'll be a collectors item by next month.

And then Carly Fiorina decided to weigh in on the matter:

See, Bill Maher wants your opinion, Carly. He's very open minded. As long as your opinion is the same as his.

Abortion rights people are constantly reminding us that men's views on abortion are of less value than women's since they can't actually have babies.  But the truth is that even women's views on the topic are worthless if they don't match those of the pro-abortion lobby. In this case, Maher didn't really want Fiorina's opinion on the matter, he just wanted an opportunity to bash those who are outraged by the multiple videos showing Planned Parenthood officials and associates selling baby parts.

Then again, maybe he was just caught off guard when Fiorina actually DID sound off on the matter. 'You mean there are WOMEN who don't approve of selling aborted baby organs for fun and profit???!!!!"' Must of blown Maher's tiny little dinosaur brain.

On the next page, Hillary Clinton let's us know what she thought of the GOP debate.

Ahahaha! Oh Hillary! You are a riot! But for someone who claims to understand the science behind global warming, you sure don't seem to understand that recycling a product usually uses more energy than the creation of a brand new product, hence shooting even more naughty emissions into the atmosphere.

But Hillary is a very dedicated recycler. She's currently recycling her disastrous 2008 campaign. She helped recycle Al-Qaida into ISIS. She seems totally okay with recycling babies.  But there's one thing she definitely does not recycle: Emails. Those go straight into the trash!

My favorite part though is how Hillary replied to her own Tweet with that little finger emoji just to remind everyone how clever her Tweet was.  Like she was saying 'See everybody! I have a sense of humor. Contrary to popular belief I'm actually human!' 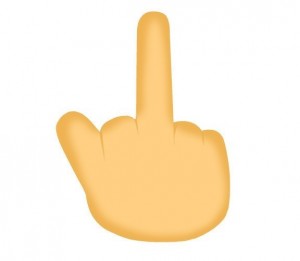 Yes CNN. Please ask the GOP hopefuls about "equal rights." How exactly did Donna think that would have played out?

Jake Tapper: 'Governor Walker, how do you feel about equal rights?'

Jake Tapper: 'How about you, Dr. Carson?'

Carson: 'I agree. As a black man I can honestly say that I should not be allowed to sit at the same lunch counter as my superior white overlords.' 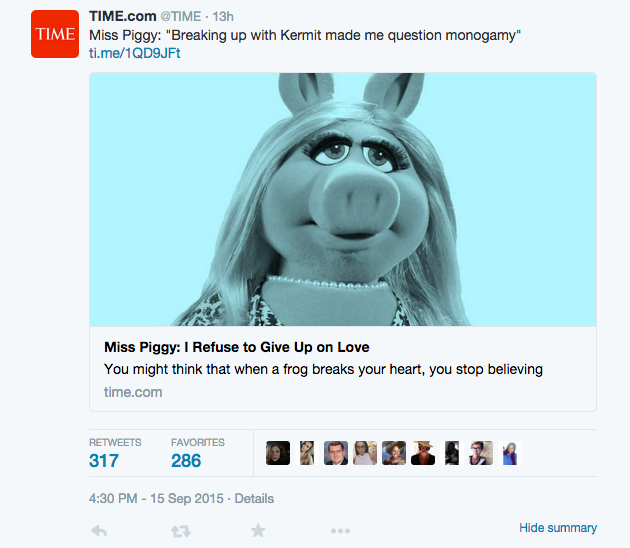 R.I.P.. Journalism. You will be missed