Our collection of the week's dumbest Tweets returns after our 4th of July hiatus and, boy, did we find some stupid stuff. First, let's take a trip to Michelle Obama's garden and see what's going on there. 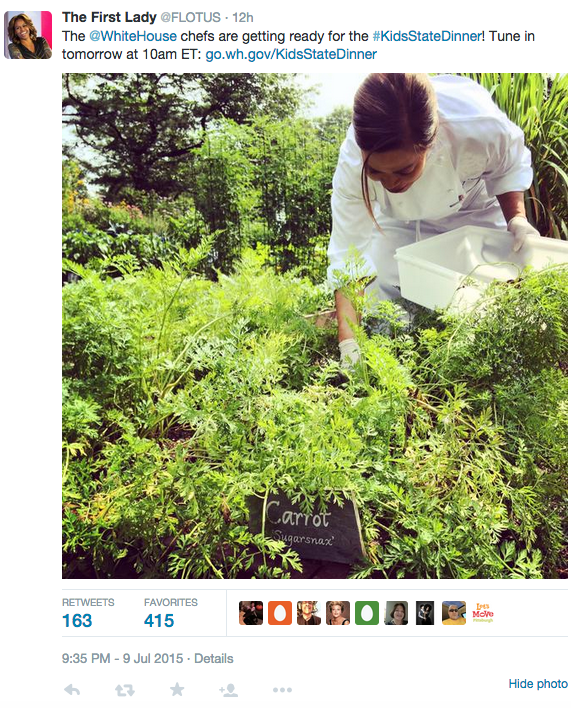 Based on the First Lady's strict school lunch guidelines, if I were a kid, I would be begging my parents not to take me to this dinner.

FUN FACT: The White House Garden, featured in the picture above is actually watered with children's tears.

....as well as the rest of the world. My question is: why does Lena hate her grandma so much? 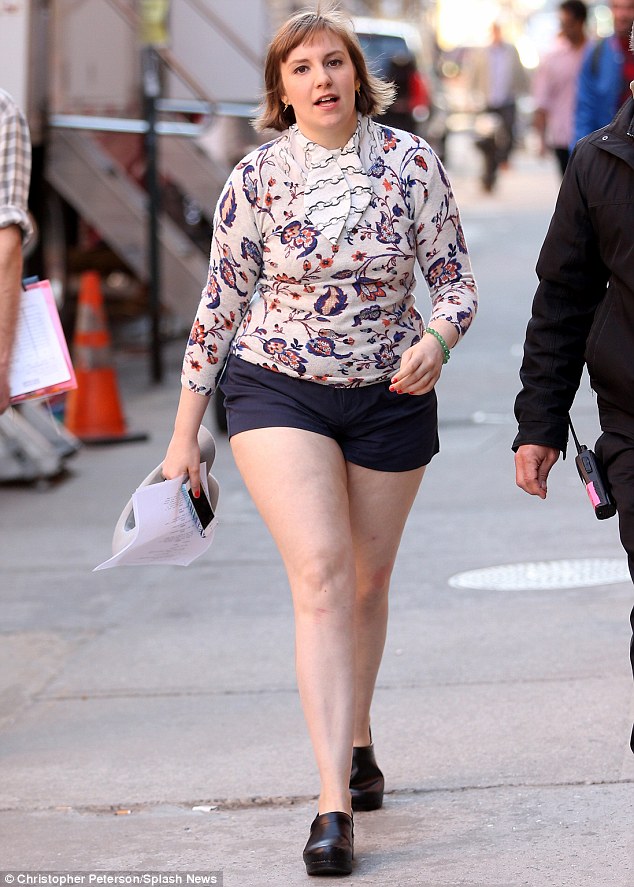 I'll be right back.  I have to take my editor to the hospital.  He just poured about five quarts of bleach into his eyes. 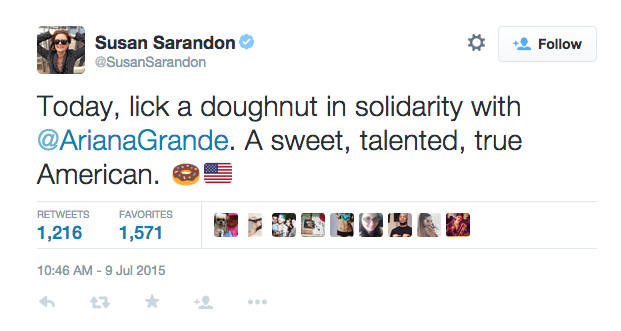 If you haven't heard, pop star Ariana Grande was videotaped licking a donut.  But that wasn't really the story. After licking the pastry, she said, "I hate Americans. I hate America." Later she apologized and claimed that she made the comments because she was upset about childhood obesity. So, basically, she hates America because we're all a bunch of donut-loving fatties, as opposed to anorexic pop stars.

But, Sarandon seems to support Ms. Grande and wants you to lick a donut to show that you, too, hate America.  This could become a thing. Defending someone who vocally expresses hatred for their country is a very brave thing to do, but not at all surprising coming from Ms. Sarandon.  Additionally, licking donuts is highly unsanitary for the person who is eventually going to eat that donut.  How would you feel if a donut licked you, Ariana?

I propose that, henceforth, we begin referring to anyone who openly expresses their disdain for America as "Donut Lickers."

And, boy, do we have a HUGE Donut Licker coming up on the next page.

This Tweet is dumb for a couple reasons.  First, Black used the word "empirical" when he was clearly trying to use the word "imperial." As for America's "tumescent ding-dong," I can only imagine that he's referring to Florida. (If you don't get that joke, don't worry about  it.)

When I go to liberal protest rallies where the participants are hollering about the latest perceived injustice that our nation has perpetrated, I often ask these angry folks if they love their country.

They typically say that they do, but when I ask them what they love about their country, they typically have to pause and think about it for a second.  Then, they usually say that they love the fact that Americans are able to speak their minds without fear of reprisal from the government. So, essentially, what these liberals love about America is that in this country they have a right to go out and complain about all the things they hate about America. Makes perfect sense.

This is probably why there are so many fewer conservative protests.  Conservatives have grievances, but overall they understand how lucky they are to live here and recognize the great things that The United States' "tumescent ding-dong" has done for the world .  Also, conservatives are unable to attend many protests due to the fact that they have...you know...jobs.

Either way, this Tweet serves as imperial evidence that Michael Ian Black is a complete imbecile. 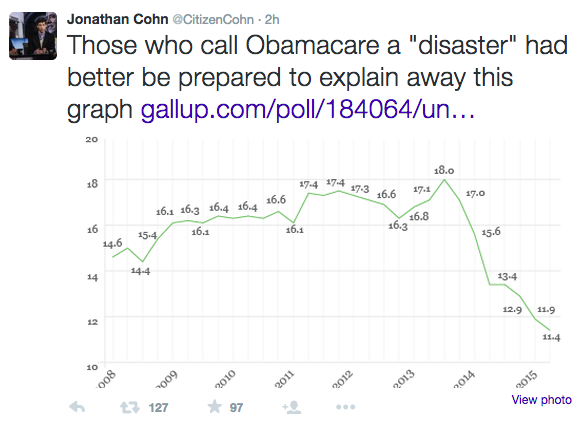 Well, duh!  When the government forces people to buy health care and spends billions to put people on Medicaid, you're going to get a drop in the number of uninsured people.  But, how many people had to lose insurance plans they liked to achieve this drop? If you go back to pre-recession levels, the drop is only about 3%.

With all the people who lost coverage.  With the millions of Americans whose health care costs have skyrocketed. With all of the problems that Obamacare has caused, is a 3% drop in the number of uninsured Americans worth it?

You can make up your own mind on that one.

The argument against Obamacare was never that it wouldn't decrease the number of uninsured - it was that it was going to screw things up for the people who already had insurance!  Which it did.  It was also sold to us based on lies and has impeded economic growth.  I'm not sure how you explain those facts away.

It's like a doctor cutting of someone's head in order to remove a brain tumor.  I mean, the tumor's gone, right? Problem solved!

Thanks doc!  Now, I'm off to get something to eat!

Okay.  Can I have some of your money then, Kanye? The store won't take my dreams as currency, for some reason.

I know, Kanye is trying to be deep and philosophical, encouraging us to follow our dreams of becoming rich and famous rappers. I'm just not sure that Kanye is the best guy to take life advice from given his track record of being an insufferable moron and egomaniac who believes he's the generational equivalent to Shakespeare.

But, anyone who's familiar with Kanye West knows what he dreams about every night. 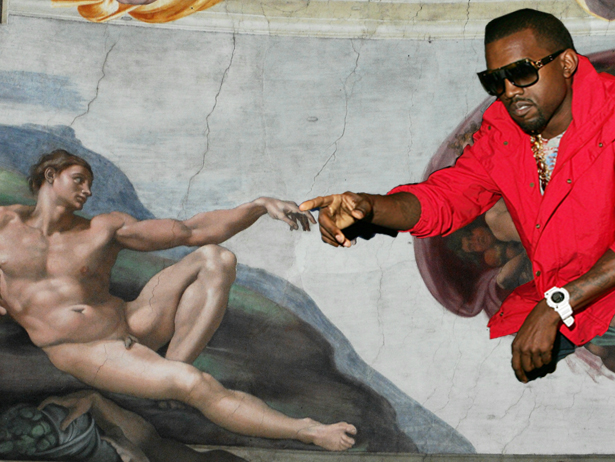 Keep following those dreams, buddy. And, if you achieve your dream of becoming God, please feed all the hungry people in the world.  Because they're having trouble eating their dreams.