It's difficult to write up something humorous in the wake of the tragic events that occurred in Charleston this week.  But, apparently it's very easy for liberals to take the event and immediately politicize it.

Recently, American liberals have been lecturing us on how systemic racism is running rampant in the country. Racist police and the return of Jim Crow laws are bogeymen that leftists have bought into whole-heartedly. That's why it's so ironic that when true racism rears its ugly head, the left would rather talk about the need for curbing 2nd Amendment rights than have that "conversation" about race that they claim is so desperately needed in American society.

But, that's exactly what happened this week.  President Obama didn't hesitate to make a pitch for his gun control agenda in his statement about the Charleston massacre only hours after the heinous murders. 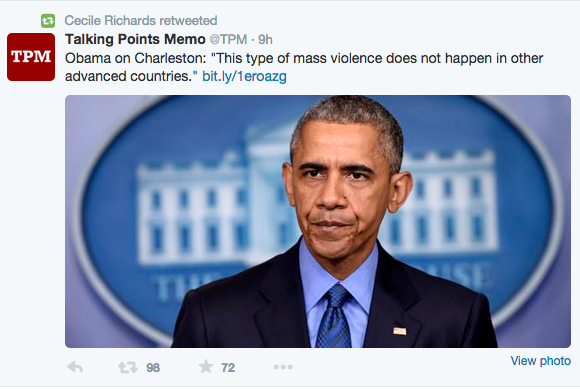 Had President Obama taken the time to go to Paris and march in solidarity with other world leaders following the Charlie Hebdo attacks, he might have realized how dumb this statement was.  Unless, of course, he doesn't consider France to be an "advanced" country.  Or Norway, where 100 people, many of them children, were murdered in an attack in 2011.

But, it's not about geography for the president.  It's about guns.

Obama using a horrific tragedy to push his ideological agenda isn't surprising.  But, it is particularly insulting to the dead for America's first African American president to politicize this type of tragedy without hesitation. Perhaps, he can't help it.  Blaming firearms for deaths, regardless of the criminals' motives, is built into the left's DNA.  If you don't believe me, look at who retweeted this TPM article.

Leftist blogger Scott Bixby tweeted out this gem in the wake of the shooting.  But, I'm not going to say much about it right now, because I have to go down to the deli to get myself an AR-15. 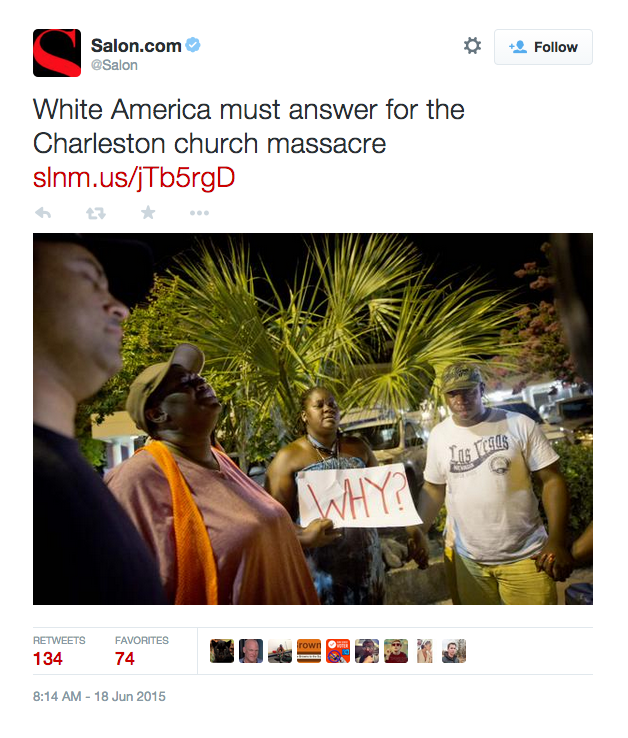 So, this is the "conversation" on race that we need to have.  Okay.  Here's my "answer."  Racism sucks. Violence against anyone based on their skin color is odious.  Despite my feelings on this issue, however, Salon seems to believe that myself and my fellow Caucasians are somehow to blame for this tragedy.

To Salon's credit, at least they blamed all white people for the murders, instead of guns.

Earth has become far too "intolerable" for actor Matthew Modine.  So, he's going to sue God.  And you know that God saw this Tweet because Modine Hashtagged his name. Hear that God? You've been served.

I hope that Modine has a good lawyer.  If this goes to trial and Modine wins, maybe the jury will award him by insisting that God give Modine his acting career back.

On the next page, Ice-T will explain why it's totally cool for blacks to use the "N-word." 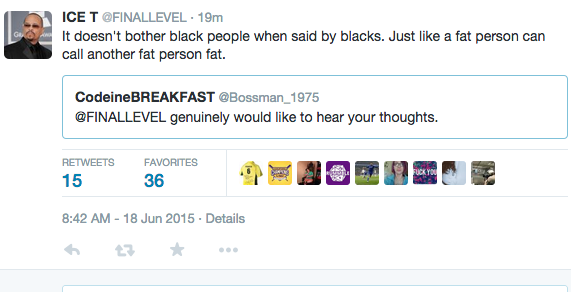 Michael Moore: What up, my fatty?

Michael Moore: Way over my pants, as usual.  You want to help me eat this stick of butter?

Rosie O'Donnell: I think you know the answer to that question, tubby!

Michael Moore: Well, get your own. This one's mine!

This is a rebuttal that's often used by liberal actors when they are criticized for having an undeserved platform from which they can spout political nonsense.

But, let's be fair to John. Once he serves two terms as governor of the nation's largest state, becomes president and then topples the Soviet Union, we will all look back at this Tweet and admit that John was right.

Actors' political opinions deserve the heightened attention that they receive - especially, if those opinions are really, really stupid.  After all, without dumb actors like Fugelsang making idiotic statements, this blog would probably not exist. 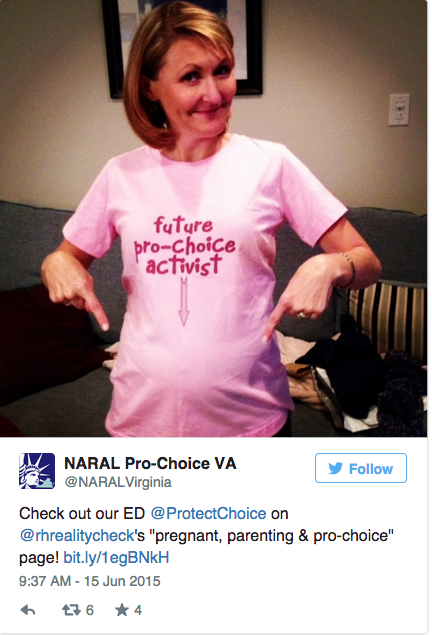