Liberals wet themselves on two separate occasions this week.  First, they totally lost their minds over the movie "American Sniper," in which an American soldier kills terrorists to protect his fellow soldiers. (Apparently, that's totally not cool on the left anymore.)

Then, they wet their panties again, this time out of sheer joy when they watched President Obama's State of the Union address, the highlight of which was when the president reminded Americans that he was in fact the president and had been elected twice.  We'll start with Michael Moore, though, because this guy clearly has a crayon lodged in his brain or something. 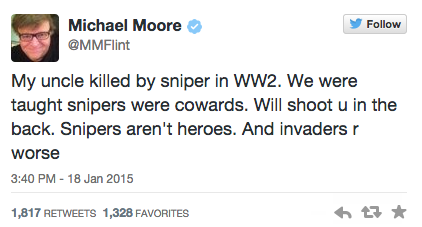 Forget for a moment that Moore is calling American soldiers cowards.  That's despicable and inaccurate, but we have come to expect that kind of thing from this gelatinous tub of goo.

What's strange here is that, if Moore's uncle was indeed killed by a sniper (either in Manila or Japan according to what I was able to dig up), BUT "invaders r worse" than snipers, then is Moore saying that his uncle got what was coming to him?  After all, the Americans did technically "invade" the South Pacific during World War II. Either way, it appears that Moore is basically saying that killing terrorists intent on blowing up American soldiers must be done in a fair and respectful manner in which the enemy can see that you are about to kill them. I'm sure the suicide bombers would very much appreciate that courtesy.

A little background here.  At the end of the film "Inglorious Bastards," Hitler and some of his friends watch a propaganda film about a fictional Nazi sniper who kills 200 enemy soldiers from a guard tower. You can almost forgive Rogan for the idiotic comparison of Nazis to American soldiers, since he was likely stoned out of his gourd when he watched both films.  But, while Moore's Tweet was based on a far-left anti-war philosophy, Rogan's Tweet is pure Hollywood ignorance.

He tried to backtrack on the Tweet later on, but it just made his initial statement look even worse. But since we're comparing things, I will say that Rogan's Tweet reminds me of his 2011 film the Green Hornet.  It was a terrible idea, everyone hated it and when he wrote it he was probably taking bong hits. 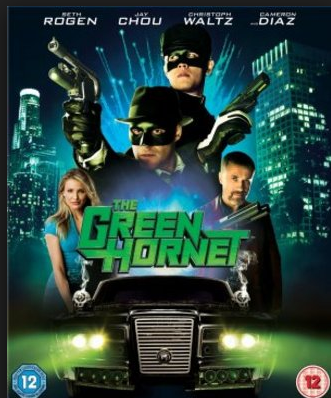 FINALLY!!!! Haha.Yeah. "Finally" is right, although it's also a pretty dumb comparison.

It only took three years for Reagan to bring us out of a deep period of economic stagnation while, under Obama, it's taken six.  But, Reagan's "moment" didn't include a record number of Americans dropping out of the workforce, massive tax increases and a nation mired in pessimism about the future of the country.

The left likes to compare Reagan to Obama because, in their minds, Reagan's only ability was giving good speeches. And Reagan was a great orator. But, for Obama, the inspirational speeches are pretty much all he's got.  They're what got him elected.

It seems like a lot of Democrats are beginning to understand this, so in their minds, anytime Obama rocks a teleprompter, it's reminiscent of Reagan.  Of course, as President, you actually have to DO STUFF, like topple an "Evil Empire" or spur a 30 year period of unprecedented economic prosperity.  So far all we've gotten out of Obama is a broken health care law and a bunch Muslim fanatics who have taken over half the Middle East.

But, to be fair, Obama has had a lot of Jimmy Carter "moments."

There was more gushing over Obama's speech from comedian John Leguizamo: 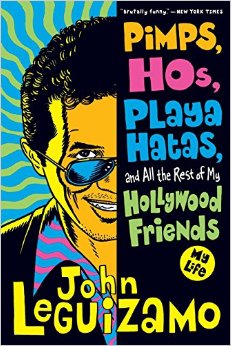 Someone elected this guy.  For those of you who aren't down with the slang these days, "cray cray" is teenage girl for "crazy."  I wonder if Salazar talks like this when he's on the House floor?

'Man! Did you hear about all those people losing their health insurance because of Obamacare? Dawg! That is cray cray!'

Those are this week's dumb Tweets.  We can assure you that we'll continue bringing you dumb liberal Tweets every week as long as Twitter exists (aka. when North Korea finally figures out how to hack it.) Because, as long as there are are liberal celebrities out there, they will never stop saying things that are absolutely cray cray.