11-Year-Old Frank Mowed a Lawn, and Restored Faith In America

Younger generations of Americans get a bad rap, and largely for good reason. Our finances are a mess, and most of us are nowhere close to owning a home. Studies have shown we tend to disdain work that we don’t find personally gratifying. Today’s college kids expect to be coddled and granted insta-A’s if they felt triggered while walking to class.

We can’t commit to a steady job, much less another person, so our marriage rates tank while our birth rates circle the same, slow drain as our bank accounts under the weight of student loans we can’t pay back as a $10-an-hour barista at Starbucks.

We have our winners, sure. But as a whole, we’re in trouble.

But on Friday morning, 11-year-old Frank Giaccio gave us hope.

When he was only 10, Frank wrote to President Trump asking him if he could mow the White House lawn at no charge, saying he'd already started his own lawn-mowing business and “wanted to show the nation what young people are ready for.” Here’s a copy of his letter, provided by the White House: 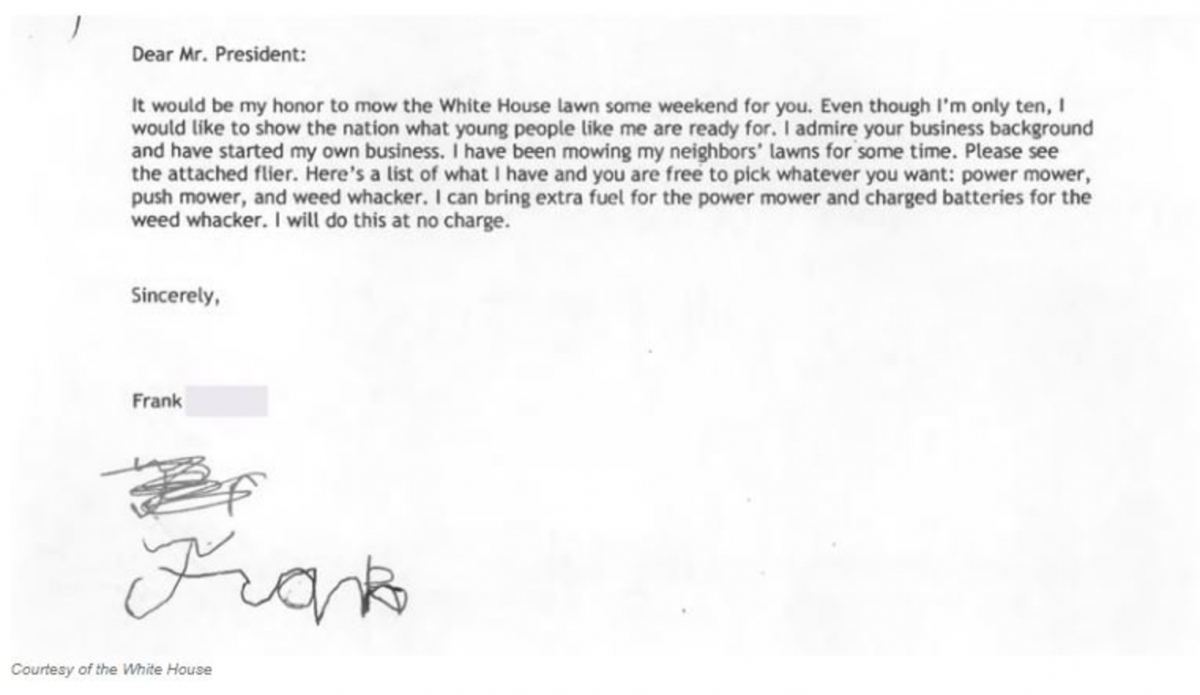 Now 11 years old, Frank got his chance to do just that on Friday – and boy, did he make good on his promise, steadily pushing a mower nearly as tall as himself up and down the lengthy White House lawn like a pro. So intent was he on doing a good job, he didn’t even pause when President Trump himself came out to greet him. After all, weeds wait for no one, whether it's a president or an 11-year-old kid.

Frank was all business. Didn't even stop to say hi when POTUS came out. pic.twitter.com/SpB43z1Jwp

The president finally got in a good handshake before Frank promptly went back to work.

Hard work. Sweat. Throwing your shoulder to the grindstone to accomplish what many would consider a menial task, without expecting a pat on the back or a gold star for your efforts. Starting small and busting your butt until you're standing on the White House lawn with the nation staring at you, watching you be awesome.