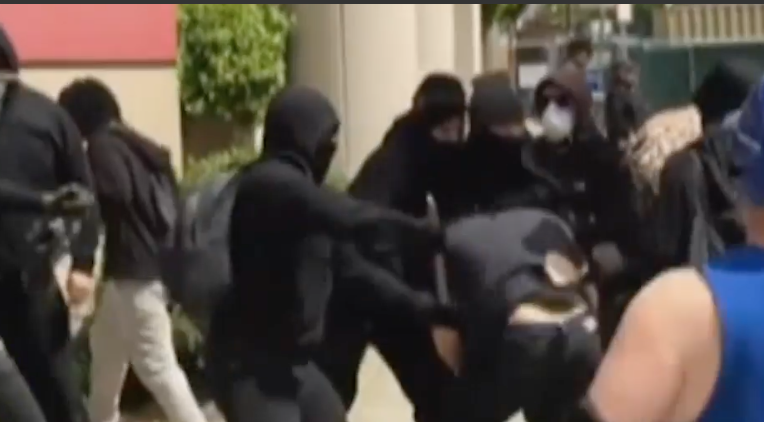 To the surprise of very few, a bunch of professors at a highly respected college have shown their ignorance of economics, political philosophy, ethics, rights, and history. The place? Dartmouth College, in Hanover NH. The issue?

When Mark Bray, one of the originators of the sadly misguided “Occupy Wall Street” movement, and now a lecturer of Gender Studies at Dartmouth, published the seemingly hurried book, “Antifa: The Anti-Fascist Handbook” on August 14th, it got plenty of attention from the leftist pop media, and that inspired folks with a modicum of critical thinking power to take a look at his ideas, and criticize Mr. Bray’s evident lack of critical thinking.

When he appeared on NBC’s “Meet the Press” on August 20th and implied that Antifa violence was justified, because, of course, he really, really understands history, and thinks aggression is self-defense, saying…

I think that a lot of people recognize that, when pushed, self-defense is a legitimate response to white supremacy and neo-Nazi violence.

…That appearance inspired Dartmouth President Philip Hanlon to respond the next day:

Dartmouth embraces free speech and open inquiry in all matters, and all on our campus enjoy the freedom to speak, write, listen and debate in pursuit of better learning and understanding; however, the endorsement of violence in any form is contrary to Dartmouth values.

But it was not Mr. Bray’s comments -- in which he accepted Antifa’s broad-brush smears of libertarians and conservatives as being “fascists” and “Nazis”, and in which he used the collectivist inversion of “self-defense” to justify aggression against non-collectivists who have not threatened the rights of others -– that inspired over 100 of his colleagues to become vocal.

It was Dartmouth President Hanlon’s statement.

As Trey Sanchez writes for TruthRevolt:

Over 100 faculty members backed the professor and accused Hanlon of limiting Bray’s free speech. In addition, a letter sent to Hanlon by Bray’s supporters asked for the president to retract his statement.

This despite the fact that the Dartmouth President had taken no disciplinary action, and merely issued a page with words on it, a page that did not espouse violence in any way, and did not, as Mr. Bray has done, seemingly justify using violence and mislabeling and demonization against others who hold non-collectivist views.

But this is typical of the long-standing collectivist M.O. which operates something like this:

First. Do not recognize or respect the right of your neighbor to control his own life or to voluntarily engage in respectful, peaceful interaction and trade with others.

Second. Do not respect the right of your neighbor to live free of your coercion and threats of aggression via the political apparatus.

Third. Claim that it is beneficial and helps "the downtrodden" to use political force to crush individual rights and the respect of it among neighbors.

Fourth. Claim that this use of political violence contrary to the right of the individual to own himself or the fruits of his labor is a way to combat elitism, racism, classism, and exploitation.

Fifth. Claim that anyone who supports individualism does not really support it, but is, instead, a hater, bigot, racist, sexist, homophobe, money-grubber, fascist, or Nazi (even though your organization is a socialist one, as was the National Socialist Party of Nazi Germany, and members of your group have applauded lines from Hitler when a wily critic read them aloud to some of you.)

Sixth. Claim that these people who oppose collectivism and larger government are threatening violence, even though they just want to leave people alone, and it is really your group, that will not leave people alone to be free, which condones violence and threats of it through the apparatus of the state.

Seventh. Claim that your violence to shut down dissenting speech is justified, regardless of whether the speech came from Nazis or was fascistic in any way.

Eighth. Label as defenders of fascism and Nazism those who point out this inversion of principles.

And this is precisely what Mr. Bray has done, to the cheers of those who signed the letter denouncing the Dartmouth President.

On its Amazon page, Mr. Bray’s book is touted by the publisher as somehow authoritative:

In a smart and gripping investigation, historian and former Occupy Wall Street organizer Mark Bray provides a detailed survey of the full history of anti-fascism from its origins to the present day — the first transnational history of postwar anti-fascism in English. Based on interviews with anti-fascists from around the world, Antifa details the tactics of the movement and the philosophy behind it, offering insight into the growing but little-understood resistance fighting back against fascism in all its guises.

Simply, antifa aims to deny fascists the opportunity to promote their oppressive politics, and to protect tolerant communities from acts of violence promulgated by fascists. Critics say shutting down political adversaries is anti-democratic; antifa adherents argue that the horrors of fascism must never be allowed the slightest chance to triumph again.

So, just as Antifa has been associated with the violent “By Any Means Necessary” group in San Francisco, the publisher implies that shutting down speech is okay, as long as the one you shut down can be labeled a “Fascist”. ‘Cause, you know, in classic postmodernist tradition, if one can label the opponent as associated with evil, one can proceed to crush his ability to speak.

But what Antifa supporters don’t openly admit is that their movement is not “for the little man”. It originated in the Soviet Union, as a government plan to spread totalitarian communism. As Joshua Phillip writes for The Epoch Times:

The organization was initially part of the Soviet Union’s front operations to bring about communist dictatorship in Germany, and it worked to label all rival parties as “fascist.”

The organization can be traced to the “united front” of the Soviet Union’s Communist International (Comintern) during the Third World Congress in Moscow in June and July 1921, according to the German booklet “80 Years of Anti-Fascist Action” by Bernd Langer, published by the Association for the Promotion of Anti-Fascist Culture. Langer is a former member of the Autonome Antifa, formerly one of Germany’s largest Antifa organizations, which disbanded in 2004.

This was when V. Lenin was in the middle of his destruction of free speech, control of the press, and purge of private property and dissenters that saw the deaths of thousands under his party rule, and which soon led to the murder of millions on Stalin’s orders.

Antifa has never been for “the little man”, nor has it been for defense against political power.

It was created by political despots who hated private property, as a way to expand their sphere of influence, and Mr. Bray might want to engage in a conversation with people who know about that.

Instead, he and his supporters, and the Antifa gang, continue to embrace a tradition of violence and anti-individualism that led to the most deaths caused by any political philosophy in human history.

Mr. Bray implies that violence is okay, because those he labels as “fascist” are engaging in threats against his crowd. But the ideology he espouses is actually the one that uses the state to threaten people with seizure of their property and regulation of their behavior.

How can they defend that?