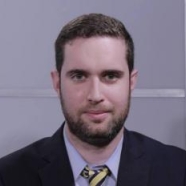 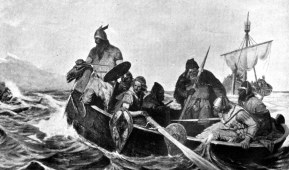 Were the vikings Muslim? One professor is disputing a viral story. 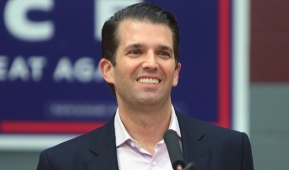 Now that's what you call a zinger. 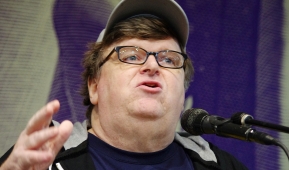 Another day, another fail from Michael Moore. 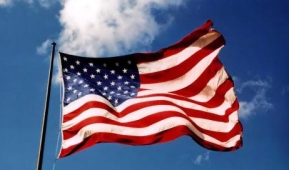 The United States Soccer Board of Directors are taking a strong stance on players standing for the National Anthem.

NBC News reported the board passed a statement confirming that all players participating in international duty for the USA are required to stand during the anthem.

The statement reads: "All persons representing a Federation national team shall stand respectfully during the playing of national anthems at any event in which the federation is represented."

While the formal statement surfaced over the weekend, the rule was apparently adopted last month.

Though the full details of the new rule remain unclear, the NBC report stated that U.S. Soccer Federation President Sunil Gulati implied that there would be repercussions for protesters.

Most of the controversy surrounding the anthem protests has died down, but U.S. Soccer had it's own issues with a player kneeling while the song was played last year.

Women's national team player Megan Rapinoe followed in the footsteps of San Francisco 49er's quarterback Colin Kaepernick by refusing to stand for the anthem during two games in 2016. She claimed it was to protest injustices against the LGBTQ community.

Kaepernick recently announced he would be ending his anthem protest at the start of the 2017 season. 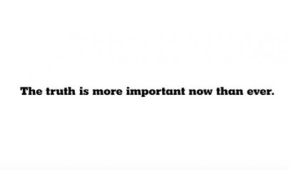 The New York Times is set to launch a television ad during the Academy Awards that seems to heavily target statements made by President Donald Trump.

The 30-second ad, entitled, "The Truth," features black text flashing on a white screen with the words "The truth is," followed by a variety of statements.

According to a report in The Hill, at least three of the statements were in reference to Trump.

"The truth is the media is dishonest," reads one statement, a likely reference to Trump's frequent comments slamming the media's honesty.

Here's another statement from the ad: "The truth is alternative facts are lies." That one's an obvious reference to a comment made by Trump adviser Kellyanne Conway.

Another statement: "The truth is a woman should dress like a woman." The Hill report claimed the publication Axios claimed this is a phrase that has been used by Trump.

The ad runs through a series of other phrases, some targeting conservative talking points such as "we have to protect our borders," "the emails are dangerous," and "climate change is a hoax." 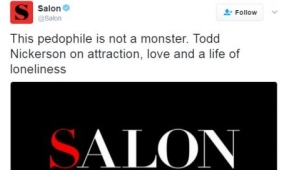 The far-left website Salon has apparently deleted a controversial article authored by a self-admitted pedophile.

As chronicled by the Gateway Pundit, Salon allowed self-described pedophile Todd Nickerson to publish an article on their site discussing his behavior on Sept. 21, 2015.

In the article, which has been saved on a web archive, Nickerson claimed he never acted on his urges, but made the case that he should be allowed to live openly regarding his attraction to children.

Mysteriously, the article has vanished from Salon's archives, and a search for "Todd Nickerson" on their site currently brings you to a page showing no results.

But a poster on the popular pro-Donald Trump sub-reddit r/The_Donald posted links to old tweets from Salon's official Twitter account which link to the article by Nickerson.

This pedophile is not a monster. Todd Nickerson on attraction, love and a life of loneliness https://t.co/jCkvTbLOZP

In order to avoid a recent rule allowing students to carry guns on campus, some assistant professors at the University of Texas are holding their office hours at an on-campus bar that does not allow guns.

According to a report from Fox 7 in Austin, graduate assistants do not always have private offices where they can independently decide if students can carry firearms.

But under Texas law, establishments that make 51 percent or more of their profits through alcohol -- like bars -- cannot allow fire arms. By using a bar, these instructors have found a convenient loophole that allows them to legally prevent students from carrying guns in their presence.

Mark Sheridan, a grad student and instructor at UT-Austin, told Fox 7 he holds his office hours at the on-campus Cactus Cafe as a matter of safety.

Brian Bensimon, the Southwest regional director for the pro-Second Amendment campus advocacy group Students for Concealed Carry, said these instructors are actually putting themselves in a place where "they are actually more likely to be a victim of violence," and added he didn't think professors should find "loopholes" to avoid this law. 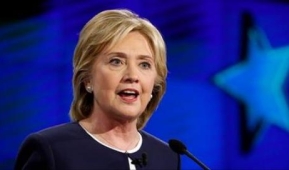 Former Secretary of State and 2016 Democratic presidential candidate Hillary Clinton dove into the controversy surrounding the resignation of Gen. Mike Flynn early this morning, with a tweet claiming it was related to "fake news."

The incident started with Democratic political consultant and Clinton ally Philippe Reines, who tweeted out a message mocking the Flynn family.

What goes around COMETS around.

And given your pizza obsession...https://t.co/rmyO7wyJKX

Reines pizza-themed tweet is a reference to the PizzaGate conspiracy, which General Flynn's son was fired from the Trump transition team for openly speculating about.

That's when Clinton jumped in to retweet Reines at 12:41 a.m. Tuesday morning, while adding in her own commentary.

Philippe's got his own way of saying things, but he has a point about the real consequences of fake news... https://t.co/a02sXiaHfp 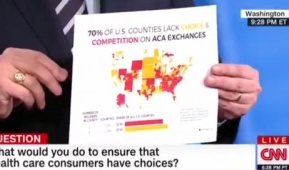 Senators Ted Cruz and Bernie Sanders squared off last night during a town hall-style debate on Obamacare hosted by CNN.

While the debate was a lively affair with two sharply contrasting viewpoints on healthcare policy in the United States, it was inevitable that the 2016 election would come up.

During one exchange, Cruz pulled out a map and said that in 70 percent of American counties, the Obamacare exchanges only provide one or two health insurance plans. He then weighed in with a revealing bit of analysis about how this related to the 2016 presidential election.

"It's interesting you look at this map and it also very much looks like the electoral map that elected Donald Trump," Cruz said.

"It's really quite striking that the communities that have been hammered by this disaster of a law said, 'Enough already,'" he added.

Correlation does not imply causation, especially in an election as complicated and multifaceted as the 2016 presidential race. With that said, it's undoubtedly true that the complications of Obamacare played some type of role in shaping the opinions of the American voter.

It's safe to say that at the very least, Cruz's map provides food for thought about the electoral effects of Obama's landmark piece of legislation.

Watch the video to see Cruz's full statement on the map. 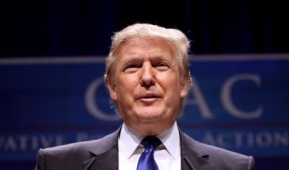 A report claims that President-elect Donald Trump will continue to make waves in the news cycle with his personal Twitter account, apparently to keep his following of 20 million plus users highly engaged.

Kelly O'Donnell, a reporter with NBC, tweeted out that the @POTUS account used by Obama, will transition over to Trump, but he will continue to tweet from @RealDonaldTrump.

Transition sources tell me @realDonaldTrump intends to keep using his own account as president, not switching to @potus himself