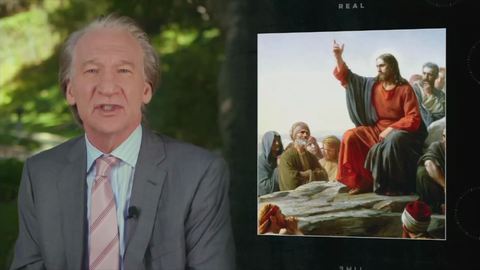 Friday's edition of Real Time closed with host Bill Maher issuing a warning to "be careful what you apologize for." Maher's closing monologue did contain some good points, including a suggestion that "If we start turning history into a big game of guilt by association, it never ends." While Maher spent much of the monologue suggesting that it was a mistake to "pack up our government and pretend none of this country ever happened" by tearing down statues of Abraham Lincoln and Ulysses Grant, he eventually suggested that by the standards of cancel culture's proponents, Jesus would have to be canceled: "If being a product of your time is no longer an excuse, what do you have to say about this guy?" At this point, a picture of Jesus appeared on screen. Maher talked about how "there were plenty of passages from both testaments" that were used by the Confederacy to justify slavery. Maher may have been dabbling in a bit of sarcasm but considering his well-known contempt for religion, it would not come as a shock if he was actually serious about some of his suggestions. After informing the proponents of cancel culture that "you're not better than Jesus or Ulysses S. Grant," Maher proclaimed that "Jesus, you know, being God and all, really should have known better. So when he comes back to judge the living and the dead, I say he's got a lot of explaining to do." Maher asked: "Instead of the bar tricks with the loaves and the wine, why didn't you zap the chains off a slave?" According to Maher, "On the subject of slavery, Jesus says sweet f***eth-all." He suggested that when Jesus returns at the end of time, "rehab would be in order and also sensitivity training." 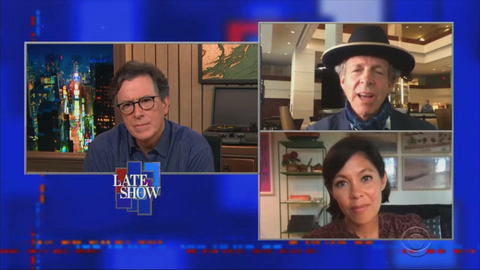 On The Late Show Thursday, host Stephen Colbert had two co-hosts of Showtime's The Circus as guests: Mark McKinnon and Alex Wagner.  Wagner was obviously giddy about presumptive Democratic nominee Joe Biden's selection of Kamala Harris as his running mate, praising her "incredible interpersonal skills." Not surprisingly, the trio recycled liberal talking points about President Trump using "misogynist, sexist attacks" against Harris, with Wagner claiming that Trump calling Harris a "mad woman" was "doubling down on that...age-old stereotype of the angry black woman." Perhaps what was most laughable was the attempt to portray Biden and Harris as moderates. According to Colbert, "When I was a kid, we would have called Joe Biden and Kamala Harris Rockefeller Republicans." Both of his guests agreed wholeheartedly. This line of thinking advances the narrative that the Republican Party has moved far to the right while ignoring the fact that the Democratic Party has moved far to the left. 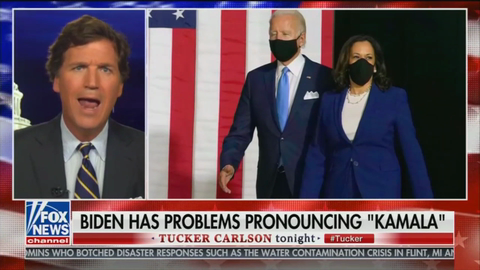 On CNN's New Day Wednesday, co-host John Berman and his panel obsessed over Fox News host Tucker Carlson's mispronunciation of Biden VP pick Kamala Harris's name. Berman played a clip of Carlson arguing with Democrat Richard Goodstein about the importance of getting the pronunciation right. During one point in their conversation, Carlson asked "I'm disrespecting her by mispronouncing her name unintentionally? You're not allowed to criticize Kamala Harris or Kamm-a-la Harris or whatever." CNN political commentator Angela Rye went so far as to smear Carlson as a racist: "It's not whatever. It is about you having to finally face what you have done to this country, to black people, to black women." Towards the end of the discussion about Carlson, Berman remarked "I call him Schmucker Carlson but it's an ethnic term so he might not understand." The panel laughed in amusement. On his show Wednesday night, Carlson concluded that based on the CNN panel's analysis, "Any criticism of Kamala Harris is immoral, anyone who so much as mispronounces her name is a racist." At this point, Carlson played a clip of presumptive Democratic nominee Joe Biden mispronouncing Harris' name as he appeared on stage with her earlier in the day. 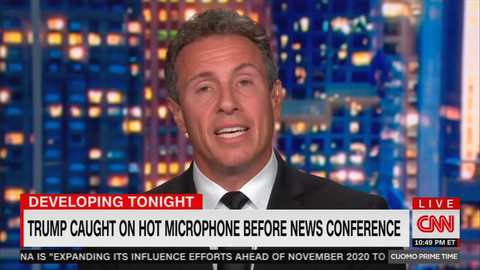 Cuomo to Trump: 'You Don't Give a Damn' About Pandemic
Ryan Foley

Toward the end of Friday's 2-hour edition of Cuomo Prime Time, host Chris Cuomo slammed President Trump's press conference giving updates about coronavirus. Cuomo accused Trump of calling a press conference "to lie to you about the nature of the coronavirus threat." According to Cuomo, Trump was "lying to you in a way that actually threatens your children." The CNN host attacked Trump over his decision to invite "true believers" inside his golf club before the news conference and "asking them to come in" to create "more crowd."After trashing the President for "inviting people in when they're barely wearing masks at a time when we're trying to convince people to do it," Cuomo proclaimed "It is what it is, Mr. President, and you are who you are and you don't give a damn." 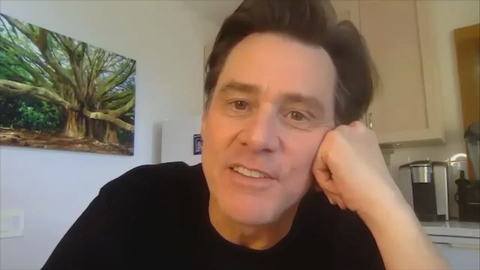 Left-wing comedian/artist Jim Carrey appeared on Friday's edition of Real Time. Initially, the discussion was not that political but that changed when host Bill Maher held up Carrey's painting depicting President Trump as "the Wicked Witch of the West Wing," which he claimed to have bought at a gallery showing. Carrey described the painting as his "picture of baby Dumb Dumb." Maher praised Carrey: "You're so political with your painting...I love that I bought this and it's going to get me a lot of money someday." Carrey talked about some of the paintings that he "can't put out there," which supposedly include a painting of "the Lincoln monument with a shotgun shooting himself." Maher pondered what Carrey would do if Trump ended up losing. Carrey did not really answer, instead electing to go on a tirade against the President, whom he described as a "megalomaniacal lunatic traitor" before warning that "we're in actual mortal danger." 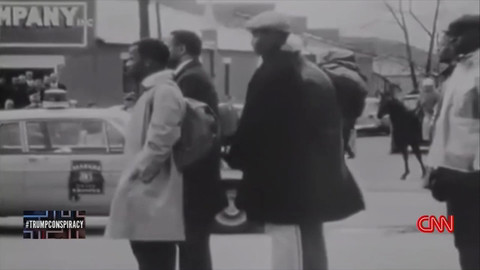 In an hour-long CNN special titled "Donald Trump's Conspiracy Theories," host Fareed Zakaria ironically dabbled in a few conspiracy theories himself. Zakaria used claims that millions of people voted illegally in the 2016 presidential election as an excuse to dismiss the "voter fraud conspiracy theory." According to Zakaria, "voter fraud is virtually nonexistent because it doesn't make sense for people to risk it. It's unlikely to swing an election and penalties are severe." Leaving the debate about voter fraud aside, Zakaria seemed to subscribe to a conspiracy theory of his own. Zakaria seemed to agree wholeheartedly with one of the people he interviewed, who said "Certain Republican elites came to believe that the Republican Party had an interest in depressing turnout and that's when they invented the friction of voter fraud." It became clear that the rest of the segment would peddle the conspiracy that requiring voter IDs was a form of voter suppression. Zakaria called the push for voter IDs a "shameful echo" of "the Jim Crow south." The CNN host argued that "these measures had a real impact," making the case that Trump would not have won the election without voter suppression. He specifically pointed to Wisconsin and how "Trump won the state by less than 23,000 ballots." One of his guests proclaimed that "voter fraud doesn't change an election result, voter suppression does." Zakaria and others on the left fail to acknowledge that in spite of alleged "voter suppression" in the 2018 Georgia gubernatorial election, minority turnout surged. 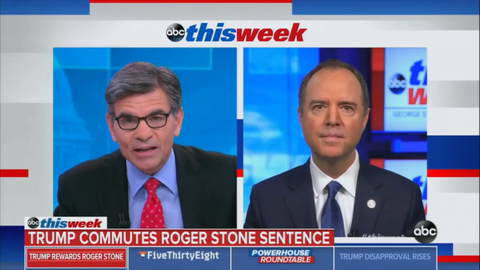 As he interviewed House Intelligence Committee Chairman Adam Schiff on Sunday's edition of This Week, ABC's George Stephanopoulos invoked a quote from James Madison in an effort to make the case that President Trump should be impeached for his commutation of Roger Stone's prison sentence. Throughout the conversation, Stephanopoulos acted as if he still held one of his previous positions, White House communications director for Democratic President Bill Clinton. Apparently, he forgot that his new position of ABC News journalist required him to act as an objective truth-seeker as opposed to a partisan advocate. Stephanopoulos read aloud a quote from James Madison at the Constitutional Convention in 1788: "If the President be connected, in any suspicious manner, with any person, and there be grounds to believe he will shelter him, the House of Representatives can impeach him, they can remove him if found guilty." Using that quote as a pretext, Stephanopoulos asked Schiff "Is this an impeachable offense?" Stephanopoulos also referenced a quote from Schiff's colleague Hakeem Jeffries claiming that "the President and Stone can still be indicted once Donald Trump leaves office" before asking Schiff "should Joe Biden ask his Attorney General to take that step if he indeed does become president?" 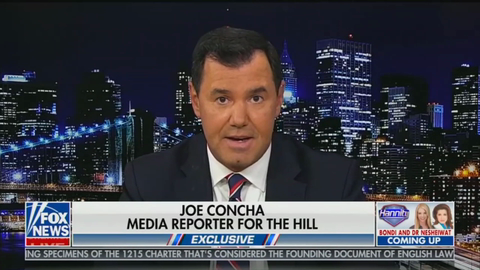 Friday's edition of Hannity featured a segment discussing CNN's hard left turn. Guest host Jason Chaffetz began the conversation by noting that CNN host Don Lemon's exchange with Terry Crews earlier this week caused a former CNN staffer "to admit that the network has taken a turn for the worse in the Trump era." One of the guests for the segment, The Hill media reporter Joe Concha, described Lemon as "everything that political journalism has mostly become and that is not to be a curious journalist asking questions and trying to get to the truth." According to Concha, "journalists" like Lemon use "their platform to advance a cause, or in this case, to be a fifty-something president of the high school debate team in defending Black Lives Matter." Concha also mentioned that during a recent podcast interview, Lemon proclaimed that "my role as a journalist is to speak for my truth and from my lens and for where I come from." Responding to Lemon's claim that "I don't think those things are biases," Concha reminded him: "That's the very definition of bias." 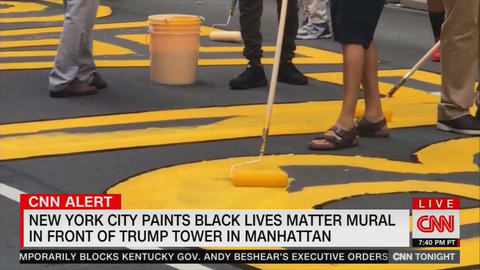 On Thursday, CNN's Don Lemon was absolutely thrilled about the fact that New York City painted the phrase "Black Lives Matter" on the street in front of Trump Tower. According to Lemon, "Donald Trump just hates this." The entire segment basically acted as a public service announcement for Black Lives Matter. He had political analyst Jared Yates Sexton as a guest, in addition to Iesha Sekou, whose organization helped paint the mural. Lemon made it clear that "I'm so glad that you're on." Sexton had absolutely outrageous analysis: "Isn't it something that the President of the United States takes it as a personal insult, the idea that black lives matter? I mean, that's really what Trumpism boils down to, right? It's the idea of a mythology of black lives are disposable and white supremacy is always brimming right underneath the surface." As the segment came to a close, Sexton praised the murals as "symbols of change that is slowly deconstructing a systemically racist, white supremacist system." 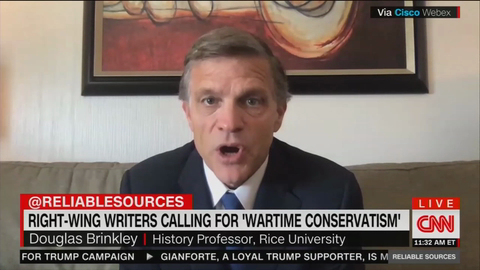 On Sunday's edition of Reliable Sources, host Brian Stelter declared that "President Trump only seems to make sense if you know how to speak the Fox News language." Stelter brought in CNN presidential historian Douglas Brinkley to discuss the "warped view of reality and history" that President Trump and Fox News subscribe to. Brinkley proceeded to refer to Trump as "the InfoWars President" and a "conspiracy theorist" who "works to divide and disunite the country." When asked to weigh in on the concept of "wartime conservatism," Brinkley proclaimed that "Donald Trump is Joe McCarthy" but actually worse because McCarthy wasn't President of the United States. We are now seeing McCarthyism running out of the White House" with "the smearing of Black Lives Matter, which is a peaceful organization" as "almost vermin that needs to be exterminated."