Donovan Newkirk is an intern for NewsBusters. Donovan graduated from the University at Buffalo with a degree in political science in May of 2020. He was The College Fix's Fall 2020 Journalism Fellow. Donovan has interned with RealClearPolitics. Donovan has written for RealClearEducation, The College Fix, Badger Institute, and the University at Buffalo's independent student newspaper, The Spectrum. 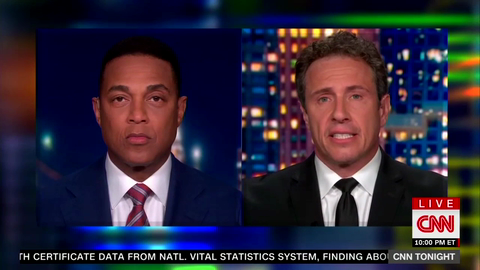 During the transition between Cuomo Prime Time and CNN Tonight on Wednesday night, host Chris “Fredo” Cuomo brazenly claimed that white people are devoid of empathy and lack the ability to “see humanity” in black people—specifically, in George Floyd. During the handoff, Don Lemon and Cuomo raved about how compelling and emotional the witness testimony was in the trial of former Minneapolis Police Officer Derek Chauvin.

Cuomo began the virtue signaling by generalizing and bashing white people for being ignorant and insensitive while formulating opinions. 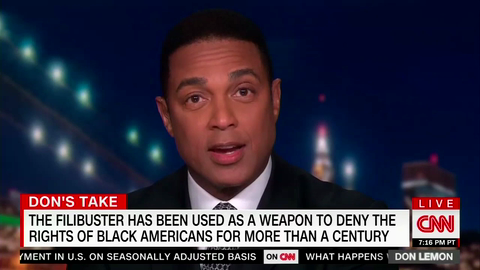 Lemon LOSES IT: ‘We Need Some Indignation, We Need Outrage’
Donovan Newkirk

On Thursday evening, CNN Tonight host Don Lemon suffered yet another anti-conservative meltdown on live television. He implored viewers to provide him with their undivided attention and to get “in front of the television, right now,” so they wouldn’t miss a second of his seventeen-minute rant about the newly passed voting legislation in the state of Georgia. The race-baiting anchor began by expressing his — and encouraging viewers to express their— outrage over the arrest of Georgia State Representative Park Cannon.

Lemon played a clip of Cannon being arrested for attempting to obstruct and preclude Governor Brian Kemp (R-GA) from signing the voting reform bill into law. The video appears to depict Cannon knocking, several times, on the governor’s office door, after law enforcement officers repeatedly instructed her not to do so. Cannon is escorted out of the state capitol and taken into custody. After the clip, the leftist hack host rhetorically asked viewers how they “[felt] about that” and asked twice if they were “outraged.” 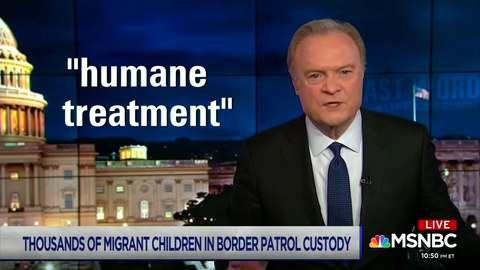 WHAT? America-Hating O'Donnell: We Stole Land From Mexico!
Donovan Newkirk

On Wednesday night, MSNBC anchor and self-professed socialist Lawrence O’Donnell dedicated over ten minutes of his show lamenting that much of America was “stolen” from Mexico. O’Donnell, demonstrably devoid of all journalistic integrity, stooped to a new low: victim blaming. The left-wing shill condescendingly contended that America is all but deserving for the turmoil at the southern border, since much of the nation and its boundaries were established by violent wars and purchases made by white men.

The Last Word host began the awkward segment by reciting a lyric from Woody Guthrie’s “This Land Is Your Land.” This patriotic and seemingly innocuous song is actually a testament to America’s violent, unjust, and systemically discriminatory past, says O’Donnell. 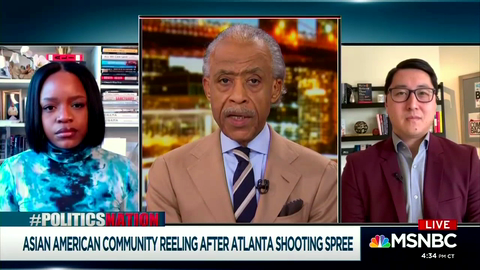 On Saturday, LA Times contributor Kurt Bardella proclaimed on PoliticsNation that former President Ronald Reagan was “a racist” and is to blame for the purported uptick in discrimination toward Asians. MSNBC’s race-baiting host Al Sharpton invited Bardella and Black Lives Matter activist Brittany Packnett Cunningham on to assist him in his routine demonization of conservatives.

The tax-evading reverend prefaced the segment by baselessly linking the purported increase in “anti-Asian hate” to his favorite scapegoat: Donald Trump. Bardella began his ineloquent response by blaming not just the 45th President but also the 40th President. According to the left-wing shill, the rhetoric used by Reagan and other conservatives has led to “extreme acts of violence.”

Without providing any examples or evidence, Bardella also claimed that the “face of the [Republican] party” is comprised of racists. 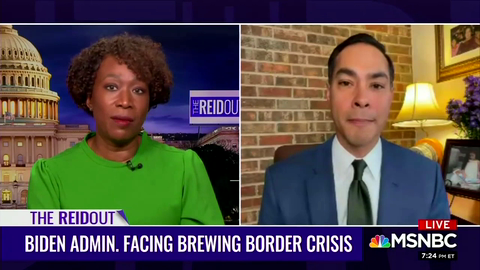 On Wednesday, MSNBC’s race-baiter Joy Reid took to the airwaves to perform her usual denunciation of Republicans and Fox News personnel, grossly denouncing anyone opposed to unmitigated immigration as a fearmongering, insensitive racist who enjoys watching children ripped from their parents’ arms.

For daring to ask White House Press Secretary Jen Psaki a basic policy-based question, the Fox News Channel’s Kristin Fisher was a primary focus of Reid’s attacks. To assist her, Reid invited on former Secretary of Housing and Urban Development and open-border advocate Julian Castro, who blamed the current inundation of immigrants at the southern border on the Trump administration. 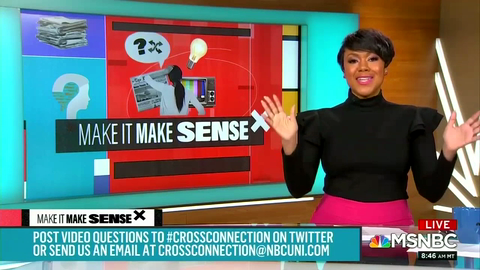 On Saturday, MSNBC’s Tiffany Cross unabashedly contended that the Federal Bureau of Investigation headquarters in the District of Columbia should be renamed after Democratic politician Stacey Abrams.

During her infamous “Make it Make Sense” segment, in which she takes questions from viewers, Cross decried the FBI’s first director, J. Edgar Hoover, as a “racist tyrant,” a “homophobe,” and a “misogynist” who is unworthy of having the agency’s headquarters named after him. Cross shamelessly had the next agency’s honoree selected, and she couldn’t wait to tell viewers who she had in mind. 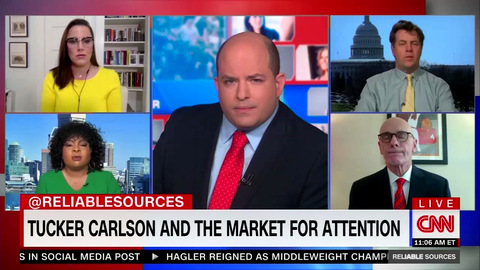 The Baltimore Sun’s media critic David Zurawik—someone who was once able to aptly spot journalists’ leftist bias—was the most unhinged of the four guests. Zurawik contended that Fox News Channel should lose its access to the White House press pool and should be deprived of all journalistic access to the Biden administration. The left-wing hack asserted FNC shouldn’t be treated like a media outlet, but rather a “political tool.” 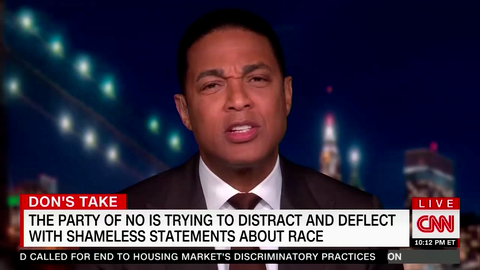 During Wednesday’s CNN Tonight, host Don Lemon had an unhinged meltdown over Republican opposition to the Biden administration’s COVID-relief bill. The fearmongering, left-wing host was also apoplectic at the idea that some black Americans don’t view white supremacy as a pervasive and existential threat. At one point during the broadcast, Lemon appeared to become so indignant that producers had to intervene via his earpiece and tell him to refrain from yelling.

Unlike his colleague and peer Chris “Fredo” Cuomo, who had a propensity to scream at the camera and at ordinary people in public, Lemon usually propagates the left’s progressive agenda in a soft-spoken and generally condescending manner. But on Wednesday, however, viewers got to witness a much different side of the primetime, race-baiting demagogue.

Lemon’s outrage reached its apotheosis when he mocked Senator Tim Scott (R-SC) for going on Fox News Channel and unequivocally renouncing and dismissing the notion that white supremacy was the biggest threat to America. The raging CNN host played an out of context, selectively edited, one-liner from Scott’s appearance in which he said: “Woke supremacy is as bad as white supremacy.”

By “woke supremacy,” Scott was, of course, referring to the left’s recent cancellation or alteration of certain brands or products for failing to adhere to their standards of political correctness. 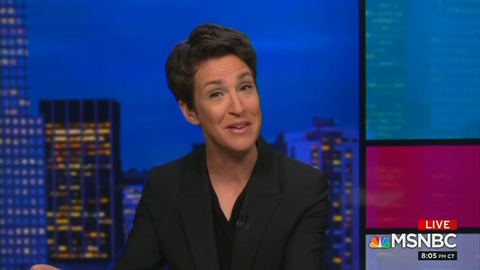 On Tuesday, MSNBC’s Rachel Maddow unabashedly conceded that four years of a Republican president had exacerbated both her arrogance and pettiness. Maddow spent over five minutes of her opening monologue gushing about the Biden administration’s debt-raising, $1.9 trillion Coronavirus-relief bill.

Alluding to then-Vice President Biden’s conspicuous excitement at the signing ceremony for the Affordable Care Act in the spring of 2010, Maddow concluded her rant by describing the explicitly partisan bill as “a big F-ing deal.”

Maddow began by analogizing the significance of the—deceptively titled—American Rescue Plan to that of the socialistic Affordable Care Act, known as ObamaCare. She then attacked former President Donald Trump for including his name in the memo section of previous stimulus checks and bashed Republicans for being self-absorbed.

She lauded the new administration’s decision to not include Joe Biden’s name on the check and baselessly claimed that Democratic presidents were “the ones who are all modest.” 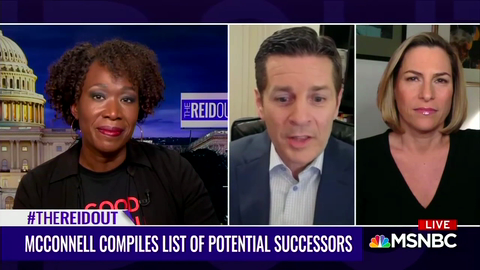 On Friday, MSNBC’s Joy Reid and her left-wing guests resorted to their typical attacking of Republican politicians and the individuals who got them elected. Reid invited radio host Dean Obeidallah on to discuss a wide variety of topics ranging from Senator Mitch McConnell’s (R-KY) speculated retirement to Representative Paul Gosar’s (R-AZ) address at the America First Political Action Conference (AFPAC) in Orlando, Florida. Reid backed up her guest’s claim that the Grand Old Party is nothing more than a “dangerous cocktail” of “white supremacy,” “fascism,” and “lies.”

Before asking her question, race-baiting Reid felt the need to diverge on a rant blasting Kentucky Attorney General Daniel Cameron, who—despite sharing the same skin color as her, has different political beliefs and is, therefore, her enemy—announced that the Commonwealth of Kentucky would not be directly charging officers involved in the shooting death of Brianna Taylor. Reid accused Cameron of “trick[ing] the grand jury” and lying to them so the cops involved wouldn’t be charged. In actuality, the grand jury determined that the officers’ retaliatory fire was justified. She then accused McConnell, without evidence, of trying to “choose” Cameron as his successor.

Asked by Reid why McConnell even ran for reelection, Obeidallah responded McConnell may very well be retiring because he doesn’t align with the Republican Party anymore. According to Obeidallah, McConnell, as well as Gosar, “dabbled” in white supremacy.